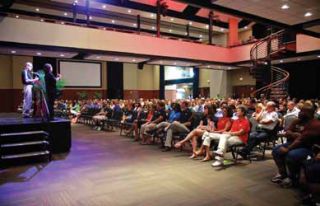 The event space is a complex of divisible and combinable rooms that will host movie screenings, performing arts events, concerts, and meetings.Gardner-Webb University, a private institution serving 4,300 students in North Carolina, recently completed a $30 million construction project at the heart of its campus. University president Dr. Frank Bonner described the new Tucker Student Center as “the single-most impressive and most transformational building ever built on Gardner-Webb’s campus.” The building’s high-fidelity sound reinforcement system is consonant with that description. Its event space is equipped with a 7.2 surround sound system that is perfect for movie screenings and rider-ready for highprofile bands. Local AV firm A Sound Experience designed and installed the system around a pair of Symetrix SymNet Edge processors networked together and with a Yamaha CL 5 console via the new Dante protocol.

When the new student center project went out to bid, A Sound Experience’s President, Preston Hinson, was quick to act. Founded in 1998 as an audio, video, theatrical lighting, and media consulting firm, A Sound Experience (ASE Service Group) quickly expanded into a full-service design, installation, and integration company encompassing all aspects of production and media technologies. Hinson bid ISP Technologies for both the distributed sound system and the professional sound reinforcement systems.

Of the ISP Technologies patentpending High Definition Distributed System (HDDS), Hinson had this to say, “The HDDS system, featuring the 10-inch driver, that was utilized in a recent 7.2 application, exceeds any THX certified system I have heard. The ability to have a highoutput speaker that can be deployed with only two pulls of Cat-6 is an amazing labor and overall cost saver. This will revolutionize the way we design the small format pro audio system. The new HDDS system from ISP is the new contractor go-to cabinet. When comparing cost and quality of the HDDS system to a traditional 70v distribution system, in both categories, the ISP HDDS system wins hands down for building distributed audio.”

The heart of the audio system resides in the event space, which is a complex of divisible and combinable rooms that will host movie screenings, performing arts events, concerts, and meetings. However, its tendrils extend throughout the student center to provide high-quality background music in the building’s restaurants, store, recreation area, and common areas. “The new system at the Tucker Student Center is tremendously powerful and flexible, and just a few years ago a comparable system would have cost two or three times as much,” Hinson said. “The SymNet Edge possesses a tremendous amount of processing power, and the use of the Dante network reduced the labor costs substantially while simultaneously improving system performance.”

Inputs to the system include six wireless microphones, Dante ports located in each of the divisible rooms, output from a 7.2 surround sound processor, several media inputs, and stage boxes. The SymNet Edge frame possesses a modular I/O topology, and one frame, dubbed “Dante In,” is fully loaded with 16 analog inputs. Its considerable processing power is devoted to conditioning each input, which is then available anywhere in the system via the Dante network. “I’ve worked with virtually all of the older digital audio distribution protocols, and they were always tedious and somewhat problematic,” Hinson observed. “ In contrast, I simply plugged in Dante and it worked. The simplicity and robustness of it blew my mind. The Yamaha CL 5 integrated seamlessly. This was the first job I have completed in which all of the patching is done via Cat-5.”