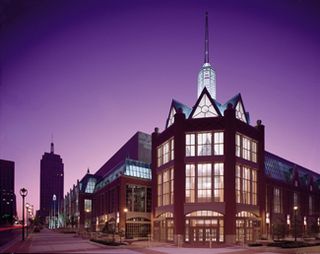 A popular choice for conventions and exhibitions with nearly 190,000 sqft of space, Wisconsin Center in Milwaukee remains one of the state’s most popular destinations for large-scale business gatherings. But times and technologies change, and in recent years there have been a growing recognition that the original audio processing infrastructure was approaching the end of its natural lifespan.

“Both WCD and [Metro] felt that it would be best to replace the entire system head-end now as opposed to when disaster strikes,” said Metro Sound & Video director of operations Keith R. Anderson, who also worked on the original installation.

Scheduling issues meant that the Metro team ultimately had “a little over 30 days to design, implement, and commission a working system that replaced all of the analogue mixers, the combining systems, and existing DSP.” Ease of integration and programming were therefore of critical importance – hence the decision to place Symetrix SymNet Radius 12x8 open architecture Dante-scalable DSPs at the core of this new processing infrastructure.

“All told, we installed 16 SymNet Radius 12x8s and ten SymNet xIn 12 expanders, along with 38 Symetrix ARC-2e wall-panel remotes for local room volume control, which were chosen to take advantage of their low cost and flexibility," said Anderson. We also provided Symetrix ARC-WEB browser-based control capability to the techs, too, so it is possible for them to control room and individual mic input levels from their smartphones,” adding that SurgeX power conditioners were among the other new components specified during his overhaul.

Top Shelf Technologies (programming) and UNAVP (project consultancy) also made important contributions to the Wisconsin Center audio revamp, which Anderson reports has delivered greater flexibility, improved audio quality, and enhanced reliability. There has been no need to return for a service issue or programming change in the ten months since the project was concluded.

The ability to populate labelling in a forward flow is one of Anderson’s favorite features of the latest generation of Symetrix DSPs, but it is the company’s support capabilities for which he reserves his keenest enthusiasm. The Symetrix team’s advice in getting the most out of the SymVue user control application, which is hosted on two local PCs and runs the overall system, was especially beneficial, said Anderson.

“Putting it simply, the Symetrix tech support team is the best in the industry,” he said. “I know because I’ve used them all, and it’s why we decided to ‘hitch our wagons’ to Symetrix more than ten years ago.”