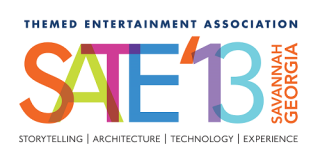 SATE ’13 is expected to draw creative thinkers, producers, suppliers and decision makers in the attractions industry. Among the speakers scheduled to address attendees are architect Chuck Hoberman, the Warhol Museum’s Josh Jeffery, Walt Disney Imagineering’s Asa Kalama, and Roger Gould and Liz Gazzano of Pixar Animation Studios. MK Haley of Disney Research is the Technology Chair of the conference.

“The Death of Halogen and the Rise of Coherent Light” will look at the history of technologies traditionally used in themed environments, and then move on to address recent advances in lighting and projection technology. The panel will discuss how these technologies can be applied in new and creative ways in the world of themed entertainment.

“The session will look at the emerging technologies for the sources of illumination in immersive environments,” said Kent. “For both lighting and projection, the change from halogen to laser will have an impact on both the design and production of these environments. Our session will take a look at the major changes in technology that have advanced the entertainment industry over the years, and we will also look forward to where we see it going.”