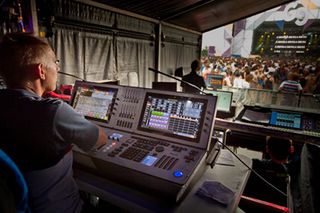 Martin EC-20 video screens were used to backlight the stages throughout the Gathering, controlled by P3 system controllers and a Maxedia PRO interface. Numerous Atomic strobes were strategically placed to light up all of the stages.

The M6 lighting console functions as an advanced ‘visual control’ surface, and is designed conventional and moving lights, digital fixtures, LED pixels and a range of media servers.