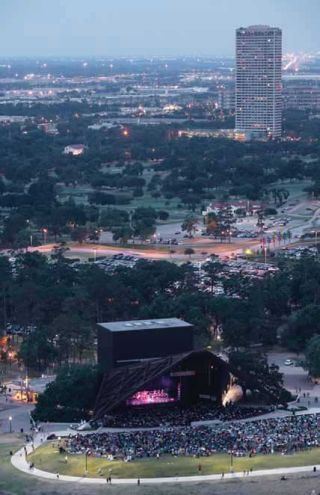 HOUSTON, TX—A fixture in Houston’s Hermann Park for more than 80 years, the Miller Outdoor Theatre has continued to change in step with the city it serves, growing from a small bandstand to become one of the finest municipal venues in the U.S. The venue opened its 2010 season with a new Electro-Voice XLC sound system with FIR-drive, the latest upgrade in a sweeping set of $3.9 million in improvements since 2008.

The City of Houston worked with a team of theater sound experts to address every facet of the installation and, rather than being hired by a general contractor after the fact, each member of the team was involved from day one. AV systems integrators Hairel Enterprises (led by project manager Rob Slaughter) partnered with consultant/system designer Jonathan Laney (for Jaffe Holden) and Houston-based architects Studio Red (who served as general contractors on the project), working closely with Electro-Voice to design and build the sound system.

“The theater needed a new system to provide better coverage and intelligibility, and we looked at EV’s XLC line array system first for a number of reasons,” Slaughter said. “The house sound technicians were already fans, having had a number of rented systems in there that they liked. Secondly we knew that EV could provide the state-of-theart in digital networked control with the TG amps and NetMax control platform. The team worked with Stu Schatz and Johnson Knowles from EV to fine-tune the XLC system design. The support we received from EV on this project was exceptional across every detail.”

Laney, whose resume includes another worldclass public theater outfitted with EV equipment, the Jay Pritzker Pavilion in Chicago’s Millennium Park, added, “Though I was a newcomer to the XLC, I have a lot of experience with EV equipment and from the outset it was clear that EV had new tools in place to help us build an outstanding sound system. In particular, I find EV’s LAPS (Line Array Prediction Software) to be very accurate, and its seamless integration with EASE room modeling to measure both expected performance and coverage/frequency response were very helpful. Using the TG amplifiers with the built-in RCM-26 DSP module and IRIS-Net remote control capability, along with the power of the FIR-drive system, really simplified the process on site in terms of making the arrays behave well in the venue. I find the XLC arrays themselves to be very uniform on the horizontal axis, with a uniform wave front—very little box-to-box differentiation. All the even coverage and clarity the theater imagined is now there. LAPS and all the work that went into FIR-drive has paid off with some very accurate measurements that minimize the time necessary to ready the arrays for a performance once they’re up in the air—no re-pinning of arrays is necessary. There are simply huge differences in predictability and performance since FIR filters have been implemented in the TG amps.”

Using EV’s LAPS minimizes the time necessary to ready the arrays, with no re-pinning needed.

To update its wireless microphone system, Miller Outdoor Theatre staff turned to AKG’s DMS 700 after comparing it in a side-by-side test with competitors. Hairel Enterprises installed the system, which Greg Stevens of AudioVend assisted in commissioning, and consists of 24 channels each having both belt-pack and hand-held transmitters.

“We had a great team, it couldn’t have been better,” concluded Jared Wood of Studio Red. “We all entered the project at the same time, and all three companies involved have a lot of experience working on theater projects. Working collectively on a design/build job like this, we were all able to focus on different details according to our areas of expertise. All this made this project as a whole go very smoothly and quickly.”

New Design
Based on the success of the project, some feel its hiring model is ideal. “We’re thinking about working with this kind of team again in the future; it seems more in step with the way the business is going, changing from the traditional process of bidding a job out and then hiring contractors after the fact,” said Jared Wood of Studio Red. “And, of course, with a team of this caliber the end product is sure to sound phenomenal.”