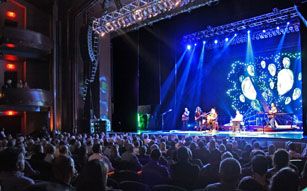 The VUE line array was used in place of the house system at the Ferguson Center for the Arts Concert Hall on the campus of Newport University. Constructed in 2005, the 1,725-seat venue is a popular stop for national and international concert tours and theatrical productions.

"Steve has an extremely loyal following, so we're accustomed to the bigger line arrays deployed in the larger venues where he typically performs," said Martinez. "When I heard we'd have a chance to try the VUE system, I was initially concerned that an 8-inch box wouldn't provide enough output, or the warmth in the low mid-range that Steve likes."

Martinez continued, "I made some calls and discovered that Mike Adams designs for VUE, and that Ken Berger is also involved in the company. I respect both of these guys immensely so I decided to forge ahead and see what the al-8 was made of."

Dual al-8 arrays of ten elements each were configured for 140-foot throw, 26-foot trim, two balconies up to 45 feet deep, and 90 degrees of vertical coverage. A pair of VUE h-15w powered two-way systems were used for additional coverage under each array. Five VUE V6 Systems Engines provided all the power and processing for the arrays.

"The VUE al-8 surpassed my expectations," said Martinez. "Steve likes a very warm guitar tone, and smooth mid frequencies. Most smaller line arrays sound harsh or inconsistent in those areas. The al-8 had all the warmth of a much larger line array and was consistent."

Getting sufficient coverage and output from the compact VUE line array was an additional concern for Martinez, who admits that he rarely takes chances with new systems in live situations. Fortunately, the al-8 had little difficulty keeping pace.

"There's always a certain amount of trial and error when working with a new system," Martinez said. "But I was impressed with how the al-8 sounded from the moment we sent signal to it. With almost no tweaking, the imaging was spot on and the coverage was consistent."

Rounding out the system in Virginia was a Midas Heritage 3000 console at FOH, and artist-owned in-ear monitors.

"We typically travel with our own FOH and monitor systems to ensure consistency," said Martinez. "Essentially we match each speaker system to our mix as opposed to making big console adjustments."

"The subs are a nice complement to the al-8 array," said FOH Engineer and Miller's long-time manager, Scott Boorey. "They provided warmth and low-end punch. They're impressive for their size."