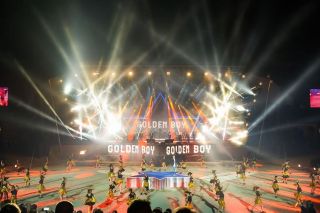 Robe provided close to 200 lighting units for the Maccabi Games in Berlin.

The Robe lighting scheme was designed by Israeli LD, Ronen Najar, who works for the combined Israeli and German production team, and frequently uses Robe for his productions. He works on both television and live events and is known for his innovative approach to crafting light. He designed the last Maccabi Games OC in the Teddy Stadium Jerusalem in 2013 and has worked internationally on several high profile projects with the ceremonies’ director Ran Tzahor over the last decade.

A stage was erected at one end of the circular amphitheatre arena – used for the gymnastics events at the 1936 Berlin Olympics, covered with a tensile roof structure, and a ground supported trussing grid installed below. Off the grid, 18 upstage/downstage orientated mini-beam trusses were flown to facilitate most of the lighting positions.

The BMFL Spots were primarily located on the over-stage rig with some on the floor. They were used for lighting the action in the arena – which featured a cast of hundreds of performers, singers and dancers accompanied by a 50 piece German/Israeli youth orchestra, plus an athlete’s parade with the 2,000 competitors from 36 countries.

The BMFL beams were used to paint general backgrounds for the show as well as texture the floor of the arena.

Ronen was among the first LDs in Israel to use the BMFL after its launch last year.

The Pointes were dotted around the rig and used for lighting the stage and floor, with some additional units positioned on the arena floor. Ronen programmed the beam, colour, gobo and other visual effects.

32 MMX WashBeams provided lighting for performers as well as audience members
The 32 MMX WashBeams were located on the front truss for highlighting the stage and lighting the performers, with some rigged at the back of the auditorium seating used for bathing the audience in shades and layers of light. The 30 LEDWash 600s were spaced out around the arena perimeter in weather domes, shooting light across the arena floor and also illuminating the audience.

The ColorWash 2500E ATs were rigged in the audience and used for additional arena lighting and texturing.

Ronen handled the task with his usual style and also working closely with video designer and programmer Shay Bonder. Content was produced by Koren Studio and lighting programmer and operator, Matti Murray. All three built the Opening Ceremony show together and operated the lighting and visuals using three grandMA2 consoles.