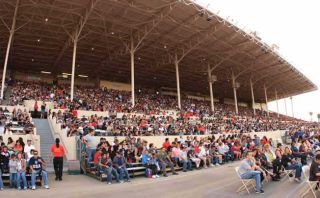 The Racetrack and 10,000-seat Grandstands have received 16 Community R1 loudspeakers and are slated to receive another 10 R1s, with eight more in the auxiliary areas.

POMONA, CA—Los Angeles County’s Fairplex is constantly modernizing its infrastructure, currently including a high-end revamping of the complex’s audio systems. Woodland Hills-based CSI Multimedia has been involved in the design and installation of these projects—along with Fairplex IT manager Ralph Schorbach—including a powerful assortment of Community R-Series loudspeakers and MC2 amplifiers in various locations.

“We were originally approached to offer a proof-of-concept demonstration for one of the nine exhibition buildings,” said CSI president Rick Shaw. “Our Community representative, Steve McNeil of Mac West Group, set up three Community R.5 loudspeakers at one end of the hall, powered by an MC2 amplifier, and it outperformed the thirty or so horns they had been using for the same space. Once they’d heard the R.5s and MC2s in tandem, they immediately asked us to do the racetrack and grandstands as well. Then we got to talking about the trams, and it’s been onward and upward from there.”

Convention Hall 9, the first building to be completed, is covered by 80 Community R.5-94TZ twoway full-range loudspeakers, with low end enhanced by six R.5SUB 12-inch subwoofers. Outside there are 16 R.25-94TZs and five R.5s. The system is powered by more than 25,000 watts of MC2 amplification. An Aphex Anaconda digital snake system provides fiber optic distribution to Building 4, which is the communication hub for the exhibit halls.

“Most of the indoor structures are relatively long buildings, and they’re used for a wide range of events,” Shaw continued. “We’re using Sabine processors to create different delay scenarios. Hall 9, for example, is divided into 16 virtual rooms, with five loudspeakers per room, each with its own dedicated MC2 amplifier.”

The Racetrack and 10,000-seat Grandstands have received 16 R1 loudspeakers and are slated to receive another 10 R1s, with eight more in the auxiliary areas. Sixteen MC2 T-2000 amps power the system.

“A lot of the equipment in this facility had been designed 20 to 30 years ago, and much has changed since then,” explained Fairplex’s Schorbach. “When you go from a system designed for 1,000 people to now handling 10,000, the old system just won’t accommodate those needs any more. We needed a lot of volume and power to fill that capacity, which is one of the reasons we looked to Community loudspeakers and MC2 amps.”

“We knew the Community R-Series would be a good choice in terms of their power and range, but I think the client was mainly impressed with their voicing,” said CSI engineer Terry Galati. “The sound is very consistent across the entire range, both up close and far afield, and they have a really pleasant voicing that people pick up on.

“One thing that really impressed us was how accurate Community’s documented specifications were,” Galati added. “We hooked up an oscilloscope and did full power testing on the R1 and the R.25, running sine waves through it and bringing up the gain slowly. We were able to ramp the speakers up to full power with no sloppiness and no high-frequency anomalies, and that’s very uncommon. Across the entire range, Community’s published specs agreed with our own test results.”

Another renovation included Barrett’s Horse Auction site and Hinds Pavilion, which have been transformed into the Finish Line Sports Grill, and Satellite wagering facility. The Finish Line Sports Grill is outfitted with 107 screens (plasmas, LCDs and projectors), along with 30 Community CLOUD6 ceiling loudspeakers for its main sound and two R.5s for focus on the lead-in area for when the auctions are held. Three Aphex 230 Master Voice Channel Processors are also installed at the lead-in area. “The auctioneers just love what the 230 does for their voices,” said Shaw. Three Community iBOX iHP1264s and an iBOX i215SW above the plasma screens supply sound for the Hinds Pavilion, the auction and wagering area. Outside, 10 R.25s cover the newly tented warm-up ring for the horses.

Eye On The Future
Ultimately the entire complex will be tied together via a central processor to provide for a park-wide announcement system. The racetrack will be upgrading its dedicated satellite broadcasting center as well, for worldwide broadcasting of horse racing events.