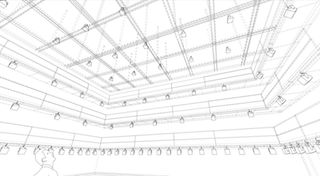 It is now possible to create sounds with incredible accuracy on spatial sound systems. Diagram courtesy of Arup.
On a recent episode of a show I watch, one of the main characters was killed. The first thought I had was, “I wonder what movie deal she got?” It was pretty clear that I had absolutely no illusions about what I was seeing on the screen. This fake story had simply “written out” an actor for some real-world reason that had nothing to do with the story. Are we always so aware of the deception of our entertainment, or are there elements of media that can still truly achieve the illusion that creators strive to achieve?

Meanwhile…I had been wondering why there has been a growing interest in spatial sound for the last few years. Dolby, Barco and others have released systems to bring spatial sound to the movies. Sophisticated surround mixing is built into many of the common digital audio workstations. There are several acoustic enhancement systems on the market, cars have more audio channels each year and there are now several home receivers that can bring three-dimensional spatial sound to your home. Is the trend of increasing the audio spatial resolution driven by a compulsion to recreate reality?

Appropriately applied, spatial sound can remake reality. It is now possible to create sounds with incredible accuracy on spatial sound systems. When the sound of a distant train or a rainstorm is reproduced on a very high-quality, high-resolution spatial sound system, it can be indistinguishable from the real thing. Sonic experiences can be imitated today so much better than visual reproduction. It isn’t simple, but with some sophisticated systems, engineers and artists can create realistic aural illusions that make real sounds…well…real. This is unique in the media storytelling palate. The trend in spatial sound may rest in the possibility.

Spatial sound isn’t new. I remember my Dad buying a quadraphonic audio system back in the early 1970s. But there is something different happening now—and I don’t think it is just us manufacturers making up reasons to sell more loudspeakers. 2015 will be the year that virtual and “mixed” reality enters popular culture, and spatial sound will be a major part of it. Microsoft’s HoloLens and Facebook’s Oculus VR will both launch reality augmenting products to the public this year and an experience I had recently demonstrated how audio can play a big role in this “reality” play.

A few weeks ago, I visited Virginia Tech’s Institute of Creativity Arts and Technology (ICAT). There they have a facility they call The Cube, which is a theater for experiments in reality augmentation and virtual experience. Their spatially tracked head mounted displays are supported by a sound system of unparalleled design in the US. Where virtual visuals still require a head mounted display to create a 3D space, The Cube is capable of creating a fully immersive 3D sound experience anywhere in the space without the need for headphones. The system consists of 128 speakers and a sophisticated signal processing system capable of playing back sound using wave field synthesis (full disclosure—many of the audio components for this installation are from my employer, Harman International). This kind of spatial sound system approaches the capacity to create a completely fabricated sound experience that truly mimics reality.

Whether we’re trying to recreate some real experience or make new realities, sound is at the forefront in truly recreating three-dimensional realism. The tools to research and apply spatial sound are available for use today. Applying these tools in future systems could lead to some interesting possibilities. Imagine a conference room where incoming voices come from different virtual “seats” at the table depending on where people are in the world. Permanently installed performance systems could allow both acoustical enhancement and panning in three dimensions. When every loudspeaker in a theater or office is individually addressable, what kind of sonic information systems might we be able to create?

Thanks to my friends at ARUP for a continuing education on the topic of spatial sound.