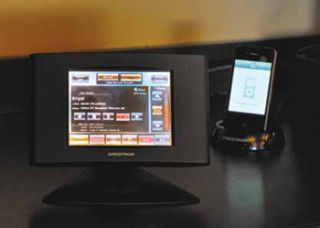 Users can bring in their own music on an iPod or CD, and can make audio recordings of their meetings using a Denon DN-F650R solid-state recorder/player.

Finding a good place to hold business meetings can be tough for a non-profit.

Rental space is expensive, forcing many organizations to meet in churches, libraries, and schools with little or no AV support. Enter the McKnight Foundation, a Minnesota-based family philanthropic organization dedicated to supporting local non-profits.

When they moved into new offices back in 2003, the foundation decided it would fit well with their mission to offer well-equipped meeting space at no charge to various partners. They started by offering one large and two smaller meeting rooms, then added two more rooms in 2007. “We host about 175 guest meetings each year, for which we provide the space plus planning and technology services,” explained Lorri Todd, meeting and event planner. By the beginning of 2010 it was obvious that the largest space needed work. This is the McKnight boardroom, normally equipped with tables and chairs for up to 75 people and expandable by opening an air wall to accommodate receptions for up to 200.

“The audio system was simply not flexible enough,” Todd continued. Though the furniture could be configured in many different ways, the loudspeaker placement was good only for boardroom-style setups. To make matters worse, there was only one volume level setting for the entire room, with no way to adjust individual sources, and the system would often generate feedback during meetings and events.

The McKnight team gathered proposals from three integrators, but was particularly impressed with the future-looking approach taken by Plymouth, MN-based RAV Technologies. “With the changes in connectivity that are upon us, it was obvious that we needed to give them an all-digital infrastructure,” said Don Owens, sales manager at RAV.

To help design the system using this new digital technology, Owens brought in independent programmer Jeff Gallus of Minneapolis-based JG Technologies. Together they created a system with analog and digital laptop inputs, a Blu-ray player, and cable TV receiver, all sending video to an InFocus LCD projector. They used Crestron DigitalMedia components and cable to transport signals.

The audio system includes a Shure podium mic, a Shure wireless handheld mic, a wireless Shure lavalier, and eight Revolabs wireless table mics, all available for sound reinforcement and audio conferencing via Biamp Nexia VC audio processors. Users can bring in their own music on an iPod or CD, and can make audio recordings of their meetings using a Denon DN-F650R solid-state recorder/player, saving copies to their laptops or USB flash drive.

“From an installation standpoint this was a simple project,” Owens said. “We pulled a single DigitalMedia cable to a wall plate at each of the two possible podium locations, terminated the connections and we were ready to go.”

A nice feature of the Crestron DM-TX-200-2G transmitter that RAV installed into each wall plate is that it can accept both analog and digital AV inputs and transmit either signal through the same cable, taking up only one channel in the switcher. “Since there was no need to separate the analog from the digital lines, we were able to take care of all of the switching with just a six-channel Crestron DM-MD6X1. A simple VGA or HDMI connection literally took care of all their needs.”

The foundation also provides video connectivity to guest groups by rolling a Tandberg videoconferencing system into the boardroom. This is a portable system, but once they plug it into one of the two wall plates, users can send conference video to the InFocus projector.

An important challenge was making operations easy enough that outside presenters would need little or no technical help. “There are literally hundreds of people who use this room each year,” said Owens. For that reason, Gallus designed a user interface with two sets of pages on the touchscreens. One is for guests who may be unfamiliar with the system, with projector on/off, source select, master volume, plus basic controls for the Blu-ray, iPod dock, and audio conferencing system.

“The way DigitalMedia handles EDID tables was also very helpful in simplifying controls,” Owens added. “Notifying each computer of the optimal resolution for the source simplifies the overall process when connecting a presenter’s laptop to the system.”

Todd said it was very important that the room be adaptable to whatever changes new technology may bring. “We wanted to be forward thinking, so that the new systems would still work in five to seven years or more.”

The new boardroom system was one of the first using an all-digital system, but Todd said the newness of the gear did not affect its performance. “Everything has worked really well, and the sound has been fantastic,” she said. “We’ve asked for a few tweaks on the touch screen, but RAV has taken care of them. We’ve been really impressed with the system and with their customer service.”