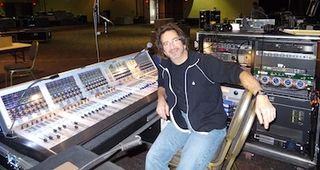 Harman Soundcraft’s “Mixing with Professionals” (MwP) series will breeze into the Windy City on October 16.

MwP offers tips and tricks about using Soundcraft Vi Series consoles from some of live sound’s most experienced engineers. The Chicago sessions will be hosted by Ken Newman, front of house engineer for Barry Manilow and owner of Newman Audio.

Ken Newman is currently on tour with Barry Manilow and has also mixed live sound for Chris Isaak, Anita Baker, Stevie Nicks, Liza Minnelli, Paul Anka and other top performers. He began mixing sound in 1972 as a teenager and has never looked back.

Newman will give MwP attendees formal training with plenty of hands-on time with Vi Series consoles in a classroom atmosphere. If participants bring a USB stick, they can save their settings and take them on the road for their next gig, or continue working on their settings using the Soundcraft Virtual Vi offline editor, which is available free on the Soundcraft website.

“I’ve had years of experience working with Soundcraft consoles,” said Newman, “and I look forward to showing attendees how to configure and mix a show using the Vi Series. During a Manilow show, it’s a very active mix and the features and ergonomics of the Vi Series offer ready access to everything—there’s nothing to slow me down or get in my way.”