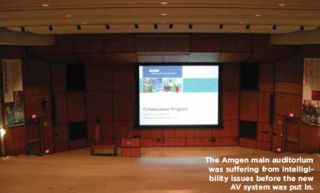 The Newbury Park section of Thousand Oaks, CA is home to the world headquarters of Amgen, the world's largest independent biotech company with 38,000 employees worldwide. During its 25 years in business, Amgen has grown to become a member of the Fortune 500 list of America's largest public corporations.

But age and size have not altered the company's focus on innovation: Business Week recently ranked it among the top 5 future-oriented companies in the Standard & Poor 500.

A 19-year veteran of the AV industry in southern California, Hagen had been working with Amgen for several years as a consultant.

"In 2006, we realized that it would be an advantage for the corporation to bring me in house full time," Hagen recalls. "One of the first assignments I was given by the CIO was to overhaul our collaboration infrastructure." As a bio-tech leader, Amgen was used to being on the cutting edge of technology in all areas of its operations, but management had become aware that the company's communications systems were falling behind.

The main auditorium at Thousand Oaks was a prime example. Built in 1994, the facility was still operating with essentially the same equipment that was in place at the original commissioning date. "We host everything from simple in-house presentations, where the audience is too large for a normal conference room, to Tier 1 (Amgen top management) videoconferences, product rollouts, and company-wide webcasts in our main auditorium," explains Hagen.

Architecturally, the room remains striking. "It's all custom millwork," Hagen explains, "with bookmatched panels and custom finishes." At the same time, all that woodwork created a fairly long reverberation time (RT60) for a 350-seat room: too long for the traditional center-cluster loudspeaker system design mounted above the proscenium to provide the kind of intelligibility required for demanding corporate presentations.

The audio system was even less adequate for the high-profile, company-wide events that are staged in the Thousand Oaks auditorium much of the time. The seats are full for these events, and that presented a coverage problem.

"Audio in the front rows had to be too loud in order to project barely adequate sound levels to the back of the room," Hagen says. "It's hardly an atypical situation with this type of center-cluster loudspeaker system, but we were tasked with bringing in new technology that would do a better job. I had a general idea that some sort of line array would be right for this space. Beyond that, I was open to suggestions." One of those suggestions came from a member of Amgen's management, who had worked with consultant Jim Hackett's Visual Systems & Services (VS&S) at CalTech's Jet Propulsion Laboratory (JPL) in Pasadena, CA.

To give Hagen and some of his internal clients from Amgen a first-hand experience of Iconyx, Hackett and Michelle Shimizu of The SG Group, the Renkus-Heinz representative for southern California, set up a demo. "The sound quality was excellent, and so was the feedback rejection. That's important for us, because many of the Amgen staff are not trained presenters - they've been known to walk right in front of a loudspeaker while wearing a lavalier mic. So the auditorium sound system has to be able to deal with those little faux pas."

Iconyx arrays are capable of extremely tight pattern control in the vertical plane. The BeamWare software that is part of the system can define acoustic beams that are as narrow as 10 degrees in the vertical plane. In addition, the acoustic center of each columnar array can be raised or lowered by programming the internal DSPs (digital signal processors). With this kind of control and flexibility, it is relatively easy to maximize gain before feedback even when the mounting locations for the arrays are behind the microphones.

Everyone who heard the demo agreed that Iconyx could do the job sonically, but the icing was the visual appeal of the system. "We have the regular tug of war with the architecture group," Hagen admits. "They are very stern about the way Amgen facilities look, and particularly so about this auditorium, which is the flagship facility of our corporate communications network. When all the wall plates have been painted to match the custom millwork, you know there's going to be zero tolerance for big ugly speaker boxes."

Audio inputs are routed and controlled with a Yamaha 02R96 console in the control booth, which also houses a full set of audio and video patchbays, which are mainly used by hired event crews when the auditorium is in production mode.

Production events such as new product rollouts occupy the Amgen facility only 30 percent of the time. "Seventy percent of the use this auditorium gets is what we call Tier One Events: executive- level videoconferences, webcasts, or presentations," Hagen explains. The system is designed to function in two modes: The "Basic Mode" allows users to operate the room as a standard conference room that has a very large capacity, without the need of technical assistance. A pair of Crestron Pro2 Processors with a TPS4000 touchpanel at the podium and TPS12B in the control booth control make up a system that presents the event leader with a simple series of touchscreen menus. "For example, managers who are holding videoconferences can operate the touchpanel in the same manner they do in any other conference room," Hagen says. "All the various audio, lighting, and video presets needed are called automatically: the host sits in a particular chair on stage and the camera will automatically be activated and aimed at that location." In "Production Mode," the system separates itself to allow individual event technicians control of their respective systems (cameras, audio, video playback and archiving, lighting, and so on). Overall, Amgen had spent $1 million in upgrading its headquarters auditorium. That's a substantial investment in technology, and a substantial responsibility for Hagen, but it's been an easy one to justify. "We get rave reviews from the top managers, who are my internal clients," he reports.

Christian Doering (chris@doering-mba.com) has profiled scores of AV projects and corporate events. He is the principal of Me, Ink, a marketing consultancy that provides brand development services to a diverse range of technology companies.