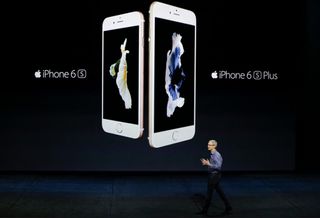 When Apple launched the iPhone 6s and iPhone 6s Plus at the Bill Graham Civic Auditorium in San Francisco, Prelite Studios played a key role in helping lighting designers visualize the event before the lighting rig was set up on site.

The latest iPhones and Apple TV launch, announced by Apple Inc. CEO Tim Cook introduced new models of Apple’s popular smartphones with many new features and improvements. More than 13 million units of the iPhone 6s and iPhone 6s Plus were sold in the first three days of their availability.

“Using Prelite meant we were able to work on site before the immense lighting rig was installed and working. Big events come with enough stress. Prelite relieves any additional stress by providing the time to build and program looks so everyone is ready to go when lighting and scenic elements are set up,” said Thompson.

“Prelite allowed us the time needed on the front end, while we were waiting for staging and scenery to be installed, to explore a variety of options to address what has traditionally been the challenge of lighting a black set for video production,” said Paul Efron.

Apple is known for its clean, elegant and minimalist staging.

”The lighting is designed to maintain focus on the presenters, product and content,” said Efron. “However as the event is live streamed to millions of people worldwide, our challenge is to still light for the best quality video production possible while minimizing the amount of “visual noise." The event marked a departure from previous launches since it was held at the Civic Auditorium for the first time. “The venue was recently renovated and is primarily used for arena concert events, so it’s basically a shell,” Efron notes. “We were tasked with transforming that shell into a world class black box theatre making the build out quite extensive.”

The set consisted of three three-dimensional black “monoliths.” The center monolith, featured a single rear projection screen. Spaces between the center monolith and the two outside monoliths formed dark “infinity tunnels,” which served as entrances and exits for the presenters.

At the conclusion of the general session OneRepublic came on stage to play audience a three-song set.

“During our rehearsal period we experienced some unforeseen delays and consequently were only able to run each of our three songs once before the live show,” Pen said.“Although the OneRepublic performance was just icing on an elaborate cake, they all made me feel as if our brief moment was one of the most basic and important ingredients of the entire event.”