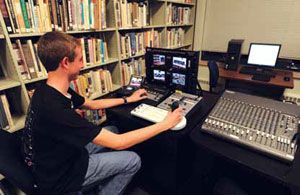 WOODBURY, CT—In September 2011, Regional School District Number 14 in Woodbury, CT, opened a new meeting room for its Board of Education in the library of Nonnewaug High School. To broadcast board meetings on public access television, a key element of the space is a mobile video production system designed by DNR Integrated Systems. When creating the system, an important consideration was that it would be operated exclusively by high school students, making quick and simple setup of the sophisticated technology imperative.

“For District Number 14, we were tasked with creating a plugand- play mobile system that students could simply roll out of a closet and set up with one easy connection to the wall for all signals; video, audio, and CATV,” said Don Gamsjager, of DNR Integrated Systems. “In addition, reliability and durability were key concerns. The system needed to provide a trouble-free connection every time.”

In the board’s meeting space, four Sony EVI -70 wall-mounted PTZ cameras, four QSC ceiling speakers, and several Shure tabletop microphones are wired to the ProBlox-D connector mounted to the wall. The mobile cart features two workstations: one for video control and one for audio. The audio workstation is equipped with an analog audio mixer. The video station offers a Roland video switcher, Sony PTZ controller, small graphics generator, small video wall, DVD burner, and CATV modulator for the live feed to the public access channel. All equipment is wired to the video cart’s ProBlox connector. To bring it all together into one sophisticated system, students need only to wheel the cart out from the closet and make one connection from the cart to the wall, a process that takes less than five minutes.

“With ProBlox-D, we were able to design a very complex system that is so simple to operate that even beginning high school AV students can use it with minimal training,” added Gamsjager. “District 14 and Nonnewaug High School have been very happy with the system’s plug-and-play capabilities, and the technology director has also been impressed with the reliability and durability of the ProBlox-D connectors. With everything housed in one connector, there is no way to make a mistake, such as connecting the wrong camera to the wrong input. Every connection that has been made has been by a high school student, and thanks to this foolproof design there has yet to be a problem. This level of reliability has more than met our client’s expectations.”