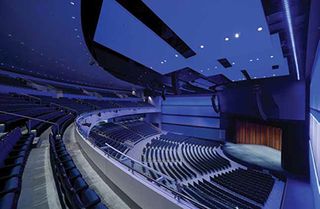 The Cunningham Performance Hall comprises a center section—floor, mezzanine, and balcony—seating 4,200 with wings to either side that can be closed off and used as lecture halls or for smaller presentations, and seat 650 people apiece. “Sound reinforcement for the main auditorium is two JBL VerTec line arrays,” said Max Curry, owner of Infinity Sound. The VerTec rig includes a pair each of VT4880 and VT4882 subwoofers, 65 VT4888 three-way arrays, and four VT4886 subcompact elements for front fill.

The theater presented Infinity with its biggest challenge, according to Curry. “Unbeknownst to us, it was decided—by the architect and general contractor—to rearrange the support trusses for our line arrays. This caused our hanging points for the chain motors to be rotated 90 degrees. Re-calculating the hang points so we could achieve proper angling was challenging at that point in the game. We succeeded and it turned out great.”

Curry continued, “We have a Meyer Constellation system for acoustical enhancement in this space as well; that’s a very cool aspect of this project.” Constellation is a flexible active acoustics system that, via a menu of presets, generates frequency-balanced, natural reverberation appropriate to a variety of applications. Choral performances might benefit from longer reverb times, for example, while amplified concerts might require minimum decay.

The 142,000-square-foot facility was built at a cost of approximately $42 million. (Inset) Two co-located Digital Projection Lightning 45-1080p projectors are converged onto a Draper 400-plus-inch diagonal screen in the auditorium.“Where the Constellation system really comes into play is that it enables them to use one building for three different types of venues,” commented Steve Gardner, operations manager for Infinity, and the project manager on the job.

Infinity supplied a Yamaha M7CL-48 console for the theater, plus an assortment of microphones, including Shure wireless systems.

As for video equipment, said Gardner, two co-located Digital Projection Lightning 45-1080p projectors are converged onto a Draper 400-plus-inch diagonal screen in the auditorium. “There are also several Sony HD production cameras,” he added, “and they’ve got a complete editing suite and video production system,” including a Broadcast Pix Granite 5000 switcher, Allen & Heath Mix- Wizard, and Tannoy Reveal monitors. “They were streaming production-quality video over the internet for their first graduation ceremony.”

In the Professional Development Center, a large space that can be divided into various combinations of six smaller rooms, each subdivision houses a Digital Projection M-Vision Cine 400 projector and associated Draper drop-down screen. “They can also be used for overflow from the main auditorium; they can send audio and video to those rooms,” Gardner said.

A Creston RACK2 processor is at the heart of the building’s control systems. In the Professional Development Center, said Curry, “Each room has a Crestron TPS-6X touchpanel.”

He continues, “We have QSC Q-Sys for all the audio routing” in the facility. The system comprises a QSC Q-Sys Core 1000 plus eight I/O frames.

Also in the public spaces, said Gardner, “We send some digital signage to an LG 70-inch LED monitor in the main lobby. There are several other lobbies that also have signage; those are just for display.” In total, there are six 19-inch LG LCD digital signage displays, plus seven LG 42-inch LCD monitors. Each has a SpinetiX HMP100 networked media player behind it.

“It was a very smooth project,” said Gardner. “We had a lot of fun doing it.”

Steve Harvey (psnpost@nbmedia.com) has been West Coast editor for Pro Sound News since 2000 and also contributes to TV Technology and Pro Audio Review. He has 30 years of hands-on experience with a wide range of audio production technologies.