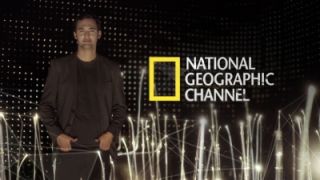 "Brain Game" host Jason Silva standing amid the PixelFLEX FLEXCurtain animation.
“Our goal for the shoot was to put the host of the show, Jason Silva, in a highly imaginative environment that felt futuristic and scientific,” said Andy Baker, SVP/Group Creative Director for the National Geographic Channels.

The PixelFLEX FLEXCurtain is an LED wall that weighs less than other large LED screen options. Available in custom sizes, the FLEXCurtain accepts video and photo content from any DVI-D source.

Baker continued, “Jason has an incredible on-camera presence and energy, and we wanted the location and set to sit naturally with that spirit and have an energy all its own. The spot needed to reflect Jason’s natural wonder and curiosity, and give him a visually interesting backdrop where he could do his performance. A static, flat environment simply wouldn’t work and while we traditionally might have added those elements in post with graphics and CGI, we wanted this one to feel more in-camera, so we used the FLEXCurtain LED screens to build a true and tangible world around him.”