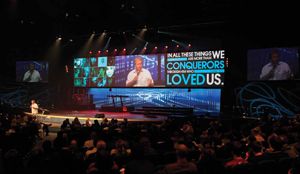 To blend or to warp, that is the question. Warping, blending, combining, and curving technologies increasingly define commercial video images. For integrators, this may mean new math, mastering a learning curve of aspect ratios to provide seamless applications for a variety of markets.

Museums, corporate lobbies, and worship centers are where the action is in terms of seeing the most in these applications, said Chuck Collins, VP, commercial AV, Digital Projection. DP’s new three-product Fusion suite is designed to provide single and multi-channel warp and blend processing for critical real-time applications such as IMAG events where minimal latency is essential.

“The suite features two processors, Fusion MD and Fusion 3D, plus the advanced FusionNet control software which Integrates control of Fusion Processors with our Titan, Lightning, iVision and dVision projectors,” Collins said. “The first key Fusion feature is the system’s near zero latency. Whenever you integrate additional electronics into a system the time delay adds up. When live events such as church services or TV presentations use video products with measurable latency, the video image and audio appear out of sync, such as when a pastor raises his arms and then a split second later the gesture appears on the big screen. Audience members find latency distracting, thus making the performance or sermon much less impactful. This becomes more serious in simulation applications where a pilot may jam the yoke to left and the video image doesn’t comply for a split second. In essential training applications such as simulation environments, latency can greatly hinder a pilot’s learning progress. While the Fusion MD has nearzero delay when used with projectors up to WUXGA (1920x1200) at 60 Hz, the Fusion 3D can handle resolutions up to WQXGA (2560x1600) at 60 Hz in 2D applications, as well as 3D sources up to WUXGA at 120 Hz.”

For those who want all the pixels they can get, he said, there are two multiple-projector techniques. The first, edge butting, describes placing one edge or image against another, then edge blending, overlaying edges and causing the whites to look white and black to look black. “This lets you control blending and contrast. The challenge is matching geometric distortion from lenses.”

NEW RESOLUTIONS
“New aspect ratios are constantly coming at us in the industry from two main sources,” said Seth Teates, midatlantic sales manager, Analog Way. “One is from computer manufacturers who seem to get a kick out of deciding to make new resolutions, sometimes for no apparent reason at all. This is why it is so important that all of our products are firmware-based, so that as new resolutions come along, we can add them to our scalers’ repertoire and move forward. I have been seeing many more 16x10 resolution computers lately, and this has been driving the corporate market towards the 1920x1200 resolution and screen size. We have developed an entirely new line of mixers just for these single screen/projector applications that specialize in scaling up to 2K resolutions, but also to maintain the correct aspect ratio for any source in any layer (background, PIP, dual PIP, etc). This includes our new Eikos, OPS, Pulse, and Smart Matrix series of mixers.”

The second source of new resolutions, he said, comes from the proliferation of multi-projector displays, also known as Soft Edge Blending (SEB). “This is becoming very popular in the corporate, government, and HOW market places as an easy way to create a major ‘wow’ effect. Using processors like our Di-VentiX II Mixer, you can create screens the size of an entire wall. Integrators for these markets are getting over their initial fears of using SEB systems and realizing how easy the Di-VentiX II is in creating these installations. With a SEB, you can create screens with resolutions of 3500x1080 or much higher just by physically aligning the projectors and utilizing our Di-VentiX II Mixers. These installations, once cost prohibitive, are now becoming much more common. They simply require a few calculations that Analog Way helps our dealers with to ensure the proper screen size, projector resolution, etc. Now, using our new Orchestra Controller, it is very simple to control these large screen venues from any third party touch screen, and from the Orchestra itself.”

His advice to integrators, Teates said, is to team up with an experienced manufacturer who will help them every step of the way from design assistance, to providing products in a timely fashion, to training at the end. “We’re here to ensure a successful result. These systems are slightly more complex, but with the right partner manufacturer, both the integrator and the client will be blown away by the results.”

As content development partner and Litefast products dealer for Kinoton, WOWsignage will be installing digital signage networks containing Litefast 360-degree displays, as well as developing seamless interactive 3D content for the leading cylindrical LED displays. WOWsignage digital artisans have developed 360-degree display content for more than a decade for all of the major cylindrical LED manufacturers, as well as for many of the HDTV, 3DTV, and iTV manufacturers worldwide

EXPECTATIONS
Over the past decade, consumers have come to expect higher levels of engagement with their experiences, said Dana Corey, VP of sales and marketing for Prysm. “Whether playing, working, learning, or relaxing, we demand information streamed at light speed, providing a sophisticated and immersive experience.”

Prysm’s LPD (laser phosphor display) technology represents a display solution with something for everyone, he said. “Facility owners will enjoy power savings and long-lasting components. Designers and architects will love its freeform installation and seamless image quality. Audiences will be inspired by high-resolution images, lack of motion blur, and brilliant design, all while using up to 75 percent less power than traditional display technologies.”

LPD makes integrators’ jobs easier with the image processor supplied with displays, Corey added. “The image processor automatically scales content to the display no matter what size or curvature, and it also divides the content among all tiles in an array solution so they are all synchronized. Thus, all the math required for display is handled by the LPD system.”

FLAWLESS FUTURE
Back in the days of CRT projectors it was easy to bend a display, but when projectors went digital it became a little more difficult, said George Tsintzouras, senior director, product management, Christie Digital. “Christie invented projector warping technology, originally adopted for very high-end markets like simulation and staging, but as these technologies have been getting better and easier to use, they have become mainstream. Churches and even those multipleprojector control rooms that are not designed in the classic cube configuration now use blending and warping. It’s exciting to see this technology transitioning into the pro AV space.”

Christie MicroTiles display serves a majority of markets, from broadcast applications such as the Colbert Report (pictured), to control rooms and digital signage.

The reality is that even with a couple of projectors and a simple flat blend, there’s an art to setting it up, he said. “The images have to be precisely aligned and require color and brightness matching, and that takes some skill by the integrator. People touch the lenses, bump into projectors, buildings vibrate, and so on, so with fixed installations, such as in a mega-church, the idea of a big blended backdrop is great but someone has to maintain it. We’ve developed camera-based systems to do this automatically. The team comes in, pushes a button, and the cameras and projectors automatically align the system in minutes so they don’t have to depend on anyone else to come in and do it.”

With the transition from 4:3 to 16:9, the talk turns to the future and the concept of digital canvases, Tsintzouras said. “For example, in the past, control rooms had projectors behind 80-inch cubes. Christie MicroTiles, our new digital canvas with tiny DLP-based engine blocks driven with LED illumination, can be stacked in almost any shape. This product line breaks free of conventional constraints and can be set up anywhere and in any shape, that’s the beauty of it. Some installers also add interactive elements to the front of the display for point-of-sale and multitouch purposes.” The MicroTiles display serves a majority of markets, from broadcast applications such as the Colbert Report, to control rooms and digital signage.

For integrators, he said, the future is unconstrained, so they need to depend on the manufacturers as solution providers to ensure the tools are available for them to do a flawless install. “MicroTiles, for example, have ECU processors to drive them and we provide the software to layout the design and map the signals. Integrators love it as we are here to support them with a comprehensive suite of tools.

“From blended and warped projection to MicroTiles the idea here is to create large digital canvases, producing any image in any size and shape,” he said. “That’s the leap; moving away from the conventional fixed ‘rectangular’ formats. From a competition standpoint, we feel validated in the direction we’re going.”