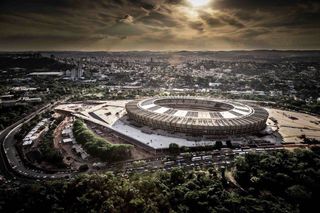 Originally built in 1965, the 62,160 seat Mineirão Stadium is Brazil’s second largest sports arena. Designed to generate benefits long after the 2016 Olympics is history, officials immediately recognized the need for a significant audio/video and acoustics upgrade to enable the 51-year-old complex to comply with FIFA technical requirements.

“Our primary Mineirão concerns focused on the level of sound comfort and intelligibility in relation to RT60 reverberation time,” Cipriano said. “Our sophisticated simulation programs enabled us to assess and ‘auralize’ the entire complex. We identified extensive sound reflections throughout the arena and concluded that acoustical absorption was required at the inner ring of the audience sector to achieve the required STI values. Speaker positioning was defined for the internal and external areas, and for numerous zoning maps, which can now be individually controlled for increased flexibility and security purposes. All audio and video systems, and control room speaker selections, were designed to meet FIFA, international security and, Olympics Committee standards. Additionally, we recommended incorporating a video wall instead of a traditional scoreboard,” he added.

WSDG Europe partner/GM Dirk Noy reported the Basel, Switzerland team performed extensive acoustical simulations to insure optimal stadium speech intelligibility, “This is a three-step procedure,” Noy explained. “In step one, each individual space must be translated from architectural information (e.g. drawings and measured dimensions), into a three-dimensional digital model. In step two, the model is fitted with acoustical surfaces. Basically, every surface of the model (walls, floor, windows, ceiling, furniture, curtains, etc.) needs to be assigned specific acoustical properties. In step three,” Noy concludes, “we perform ‘virtual’ acoustical measurements in the model and apply those results to correct or modify any (absorptive or reflective) acoustical issue.”

Simultaneous to this extensive Mineirão assignment, WSDG coordinated extensive audio and video upgrades for Brazil’s largest sports venue, the Maracanã Stadium in Rio de Janeiro, which hosted 250 thousand fans for a KISS concert in 1983; And, for Independencia, a 25,000 seat arena built in Belo Horizonte in 1950. All three stadiums had hosted events for the 2014 World Cup. Maracanã hosted the opening and closing events of the 2016 Olympics.

“We are extremely pleased to have lent our expertise to these formidable Brazilian stadium projects,” Renato Cipriano concludes. The collective expertise of our European and U.S. associates enabled us to provide precise testing, exacting presentation drawings and meticulous system integration programs in an extremely efficient, and cost-effective manner. We were honored to have participated in this extraordinary Olympic adventure.”