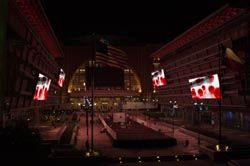 Tronic Studio's collaboration with Target combines art and branding in a new way with digital signage.
Tronic has crafted seven minutes of animated and live-action branded content for the Victory Media Network, the world's first large-scale, outdoor digital arts gallery, in Dallas, TX. The content, part of Target's "Art for All" initiative, plays three times a day, as a countdown to noon, 6 p.m. and midnight, on eight huge LED screens in Victory Park, a new downtown Dallas development linked to the American Airlines Center.

Cofounders Jesse Seppi and Vivian Rosenthal have positioned Tronic as a source of innovative conceptual work and technological executions embracing all new media. "We believe Tronic is a great resource for brands that wish to explore forward-thinking venues," said Seppi. "Thanks to our background in architecture we bring distinctive insights to the future of marketing. We're pleased that artwork can be shown to be a viable form of advertising that can get people excited about a product or brand through unconventional, non-literal means."

Victory Park is one of the largest high-definition outdoor media installations in the world. Barco has provided over 46,000 Olite 510 outdoor LED modules for the Victory Media Network, which will include two fixed 20x20-foot tower displays, a digital portal, and eight movable 15x26-foot LED walls installed in two four-panel groups facing each other across the 60-foot wide Victory Plaza. The movable media displays are mounted on rails, and stacked two-on-two. The panels can be choreographed individually with discrete video and surround-sound feeds, or locked together to form one 30x50-foot, 16:9 HD screen.

Rosenthal said Tronic created three different "upbeat, engaging, and high-energy" versions of "Marbles:" two 30-second spots and one 45-second spot. The red CG marbles, whose dynamics are endowed with a certain degree of intelligence, move through all-white scenarios in the spots. "We took Target's 2D, red-and-white branding into a 3D world that's photoreal, glossy, and polished," said Rosenthal. "It elevates the look of the logo, making it more visually sophisticated.

"'Revolution' was our concept. Target told us they wanted something featuring graffiti," Rosenthal recalled. "We wanted to create a magic feeling. You come across big floating white cubes; we set them on casters five or six inches above the ground, which cast shadows and set the mood at sunset. So many spots show the expected graffiti on buildings, but with Target's 'Art for All' concept we decided to look at graffiti as more sculptural."

Tronic's pieces for Victory Park have generated an extremely positive response from Target. "Our work is stylish and innovative like their broadcast spots but at the same time the work at Victory Park marks a departure for Target," said Rosenthal. "Target recognizes it's making an emotional connection with the viewer at Victory Park and building a positive relationship with the brand in an innovative way."