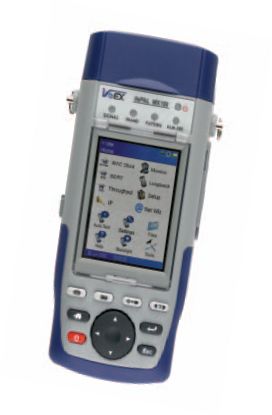 Looking at the VePAL MX100, it's easy to be impressed by the power that's packed in such a small footprint. It's about the size of two standard VHS tapes held side by side. In addition to generally testing your network connection and providing VoIP tests, this little unit does a nice job of telling you about an MPEG transport stream. Like all test devices, it requires a little configuration. However, if you have a campus network to take care of and you are delivering video over IP, this is a device you need. While designed primarily for technicians in a triple-play environment (voice/video/data), it also has obvious applications in an enterprise video environment.

We wanted to see the basic tests of video because you would likely use this tester when the service level has deteriorated. While it has several capabilities you might use in your lab, we focused on using it as a troubleshooting tool. It supports 10/100/1000 Mb/sec Ethernet and either copper or fiber connections. VeEX has other units for DSL lines, too.

After powering up the unit, you need to configure it for your network. That's easily done with touch sensitive icons. With an IP address and mask, MX100 will connect to your video network. There are two ways to define video streams to your tester. First, a pop-up keyboard allows you to enter the IP address and port of each stream. It's not as fast as typing on a keyboard, but you are only entering about 20 characters

per channel. Also, when you've completed the task, you can store it for future sessions. The second method is to enter the information into the supplied software package, ReVeal MX. It runs on a Windows platform and takes only minutes to install. All you do is indicate that you want to create a channel table and an empty table appears. Clicking on "Add" causes a template for the channel number, name (such as NBC-TV), stream type, multicast address and port, and the codec type to be created. Choosing Auto as the codec type tells the unit to detect the codec. You can store and test three channels t a time from this table. With the channel line up defined, a few taps on buttons synchronizes the unit with channels that are available to be tested.

When you are ready to run a test on your choice of three channels, you can click on the Start button on each of three screens: Summary, Video, and Map. The Summary test gives the line rate, total stream rate, and the individual video and audio rates. The Video Test is where you see the power of the unit. You see packet counts, packet loss, the inter-packet gap (IPG), and the latency. With a little experience, you'll quickly detect when your network is behaving abnormally. You'll be able to see if the packet loss is due to loss of IP packets or loss of the MPEG packets within the IP packets. While the unit is designed to give PCR jitter (the PCR is the program clock reference, essentially timing), in our instance, it couldn't give the value accurately because our encoder placed the PCR value in an untypical location in the audio stream. That wasn't a great concern for us because this is atypical behavior for encoders. Not only that, it is rare that a technician, troubleshooting a problem with a stream, would need to know PCR jitter.

The last screen in the video test lists the individual program IDs (PIDS) and types of streams in a table. This is needed information if you are going to check the settings of your encoder. And you can verify that the encoder is meeting certain standard requirements such as placing the Program Association Table (PAT) on PID 0.

The third tab available is the Viewer tab. When you choose it, the MX100 decodes the video and gives you a screen shot from the channel you are testing. This enables you to be certain that you are seeing the correct program stream.

The MX100 has other capabilities that we don't have the space to cover here, such as testing VoIP, doing ping tests, and trace route tests. However, we found its video testing features easy to use and beneficial. With a list price under $4,000, we think you would be hard pressed to find a more efficient method of peering deeply into the MPEG transport streams passing through your IP network.

Phil Hippensteel is an industry consultant and assistant professor at Penn State University. He can be reached atpjhippen@comcast.net.