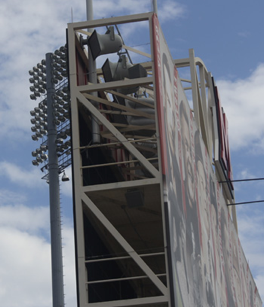 However, the existing stadium sound system was retained, forcing RedHawks football fans to endure inconsistent coverage and poor music quality. For several seasons, the university supplemented the system with rental equipment from integrator Loud and Clear. But, in 2014, they asked Loud and Clear’s Eric Cimini to provide a completely new installed system to eliminate the need for rental equipment, provide uniform coverage and enhance the fan experience with better musical performance.

The new scoreboard system uses two Community R2-52 and ten R2-64MAX loudspeakers to cover the stands and the field. Three R6-Basshorn woofers provide long-throw LF coverage and six VLF218 subwoofers, which are rolled out below the scoreboard during games, supplement the LF performance for music. Community R.5 and R.25 loudspeakers provide coverage beneath the stands, in restrooms, and in the concessions area.

The system is powered by Crown iTech amplifiers and utilizes a Peavey Media Matrix for mixing and primary DSP functions. Loud and Clear added an Audio-Technica wireless lapel microphone for field use and a pair of Community dSPEC DSP processors for zoning and loudspeaker management. The dSPEC zoning also allows loudspeakers covering the field or the stands to be muted during practice.