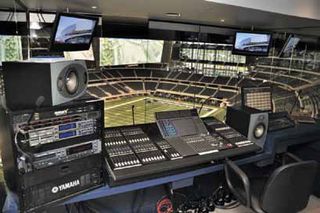 As soon as AV equipment is unboxed and installed, whether in a boardroom equipment closet or a dedicated machine room, it is at risk from the adverse effects of power and heat anomalies, natural phenomena such as lightning and earthquakes, and theft.

Yet not every unusual event on the AC power line, neutral or ground conductor has an impact. Bob Schluter, chief engineer and CEO, Middle Atlantic Products, noted that such events occur all the time, and recommends looking to the IEEE for a definition when discussing surge, spike, or undervoltage events: “Unless you put them in context—how much, what was the duration—they have very little meaning.”

Furman Sound’s Series Multistage Protection circuit is one such rack-level solution. “This is not just a surge suppressor, it also monitors the incoming voltage,” explained Chris Desalernos, domestic sales manager, Furman Sound, noting that the company has shipped more than 300,000 circuits without any failures. “As it goes over a particular threshold it will disconnect the power not only from your connected equipment but also from itself.”

Desalernos cited an example of a band on the road that was accidentally supplied 240V by the electrician. “The wireless rig got fried, but the front of house equipment was safe because it was plugged into a Furman.”

The company has now taken AV systems power management a step further with BlueBOLT, which offers IP control over compatible products from Furman and parent company Panamax. With Blue- BOLT, said Desalernos, “Since you can document your history, if your client is experiencing failures down the road you can show them the data supporting the fact that they need a voltage regulator.”

The system is implemented through a plug-in interface card that provides an ethernet port, according to John Benz, marketing manager, Furman Sound. “The whole system is cloud-based and accessed through a local area network. That gives us flexibility in the future, because it’s software based.” The software may be configured to send mail or text alerts.

As Peter Cook, vice president, Juice Goose noted, in addition to offering protection against surges and spikes the company also focuses on high frequency interference on the AC line, which creates audio or video static and can come from fluorescent or neon lights, dimmers and motors. “That can occur between line and neutral [normal mode] and neutral and ground [common mode],” he elaborated.

Cook observed that voltages are more likely to sag than surge, requiring either a voltage regulator or an uninterruptible power supply. “With UPS devices you’re running off of a battery 100 percent of the time. That battery provides the purest buffer between anything that’s going on in the outside world and within your rack.”

Surges are less of a threat to current AV equipment, Schluter believes. Modern switch mode power supplies, unlike older transformer-based designs, can cope with voltages in the range of 100V to 240V. “If a voltage surge comes along and swells it to 150V, anything that’s fed with a switch mode power supply is going to deal with it,” he said.

Lightning is quite another matter. “Any kind of electronic component that you put outside is potentially a lightning rod,” noted Cook, offering satellite dishes, outdoor speakers, and surveillance cameras as examples. Juice Goose offers a variety of inline products, with coaxial, RJ-45 and other connections, that shunt the energy surge to the cable shield. A second group of products, he said, “will divert that energy to a wire that you attach to a copper rod stuck in the ground. That’s the way you really ought to go.”

Schluter believes that many people overestimate the heat output of equipment (see related sidebar). Thermal problems are rare in machine rooms, but in telepresence and videoconferencing applications that util ize cabinetry, equipment shutdowns due to heat remain a problem. Whether the equipment enclosure is passively vented or fancooled, he said, “If you don’t think about how air flows in a cabinet, where it comes from and where it’s going to, that might give you a false sense of security and you end up with a problem.”

Tripp Lite’s LCR2400 Automatic Voltage Regulation system is rated at 20 amps/2400 watts and offers EMI/RFI filtration along with surge and spike protection with a total of 14 outlets.

Where a fan is required, Schluter recommends a thermostat-controlled device. “We want to shut off the fan whenever it’s not needed, for the dust and for the energy. In today’s world, where we all should be caring about the planet, we want to turn things off when they’re not needed.” An air filter can help guard against dust buildup.

Although AV equipment may be installed in certain instances alongside IT equipment that must remain operational in the event of an earthquake or, perhaps, terrorist attack, it typically poses only one specific threat, noted Schluter: “Far and away what we see everywhere is protecting people from racks falling over, the physical damage of a rack on somebody, and preserving egress.” At locations outside earthquake zones, such protection is largely limited to equipment in buildings rated as first tier response centers.

Theft can also be a problem, and is exacerbated by easy access to formerly proprietary security hardware, according to Schluter. Now, he said, “The trend is to make proprietary specialty hardware where the driver bits cannot be obtained at home improvement stores.”

Schluter is also seeing a move toward three-point latches on rack doors. A rod that locks the top and bottom edges of the door in addition to the key latch prevents anyone from gaining access by bending the door.

SurgeX equipment protects the Dallas Cowboys Stadium LED display, which is the largest in the world at 11,200 square feet.

Shannon Townley, CFO and SVP of sales for SurgeX, listed several critical installations that include the manufacturer’s gear, including the Dallas Cowboys Stadium jumbo screen, the capitol buildings in Arkansas and Texas, and the Hynes Convention Center in Boston, MA, which recently installed 35 SurgeX iControls.

SurgeX developed its iControl IP addressable power conditioning management system with Green Power technology which enables automated power up/down of selected components on a customized schedule to maximize energy efficiency. “The iControl was requested by consultants based on the changing needs of AV customers and the continued push to become ‘green,’” Townley noted. “Not only does the iControl provide the opportunity to manage power more efficiently, but the remote management capabilities allow dealers to provide value-added services to their customers without rolling the first truck.”

SurgeX has heard tale of more than a few incidents where its products have saved the day in the field, “but recently a customer in Greensboro told us of a situation where SurgeX saved many critical AV systems during a horrific lightning storm,” Townley shared. “Some of the equipment there was not protected by SurgeX and it fried, but the high-dollar, critical AV gear was saved from any damage, effectively saving them a lot of money.”

“The S20’s network manageability makes life easier for an installer primarily by enabling them to reboot hung equipment (e.g., satellite receiver, automation controller, etc.) without having to send out a service truck,” explained Patrick Donovan, surge and AV power product line manager at APC by Schneider Electric. “This obviously saves them time, money, resources, and is much less intrusive on their client—all of which means better service.”

Of course, where products like the S20 truly save money is in protecting equipment. Donovan shared a story about a commercial and residential AV installer in Georgia who had a client with a 6,000-square-foot summer home with two APC S20 power conditioning battery backup units protecting home file servers, AV gear, and a GE security system.

“No one was home when the house took a direct lightning strike and lit the house on fire,” Donovan said. “The APC S20 units survived the blast and kept everything up and running. This enabled the GE system to call the fire department. They came and put out the fire flooding the attic where the S20 units were located. Still the APC battery backups kept providing battery power. The firemen left, but within a few minutes, the fire re-started apparently. Thanks to the long runtime of the APC S20 units the GE system was able to call the fire department back yet again. The client’s art collection, $130,000 grand piano, music and video collection, as well as 20 years’ worth of tax and business records stored on the file servers were saved along with the house itself. Needless to say, both the installer and their client love APC.”

The Heat Is On

“When we’re trying to deal with protecting equipment against heat it’s a simple calculation,” said Bob Schluter, Middle Atlantic Products. “What people don’t understand is that they can’t take the wattage off the nameplate on the equipment. There’s less heat than people think. They have to take the current draw.”

Noting that there are simple calculators and other resources available on the web to determine how many cubic feet of air per minute a fan must move to maintain a set temperature, Schluter offered several examples (nameplate wattage converted to amps).

“Tripp Lite was thrilled to be selected by Cisco to provide a power and network control solution for Cisco TelePresence,” said Tripp Lite VP Dave Lund. “Working in close partnership with the TelePresence Exchange Business Unit, we were able to develop an integrated, flexible, cost-effective solution that met Cisco’s demanding requirements for protection of this key technology.”

Steve Harvey (psnpost@nbmedia. com) has been west coast editor for Pro Sound News since 2000 and also contributes to TV Technology and Pro Audio Review. He has 30 years of hands-on experience with a wide range of audio production technologies.