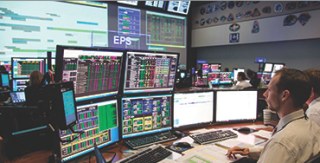 On December 5, 2014, NASA’s new Orion spacecraft successfully completed its first test flight. Recognized as the beginning of a new era of space exploration, the flight is the first in a series of launches planned to lead humans to an asteroid, and eventually on to Mars.

The Orion spacecraft was built by Lockheed Martin, NASA’s prime contractor on the project. In the course of Exploration Flight Test 1 (EFT-1), Orion reached an altitude of over 3,600 miles. During re-entry, Orion sped through the atmosphere at about 20,000 miles per hour, generating temperatures of over 4,000 degrees Fahrenheit around the heat shield. This flight was the first step in a series of missions intended to prepare for manned expeditions into deep space, and along the way, the Orion team gathered data in order to validate designs and prepare for the objective of sending astronauts to Mars.

During this mission, the Orion Test Launch and Control Center was the central hub overseeing the flight operations of the spacecraft. Lockheed Martin subcontracted Springfield, VA-based Orion Management to design and install the AV system for this command and control center.

“This was the first step for Orion into the AV world,” said Dale Cicirelli, Orion Management's Florida Division manager. “The customer was looking for a way for the engineer to share information.”

The application requirements included a wide variety of video formats, from standard broadcast video to Ground Support Equipment (GSE) video streams. The system design also required that outputs be divided between two separate locations to allow users in one area to share their console images with other engineers elsewhere for review and collaboration in real time without leaving their own consoles.

Orion Management’s team of security system integration experts branched out into new ground when designing this control center. To complete the mission, Orion’s team sought out a supplier with control room experience that could not only provide the required equipment, but also join their team as a collaborative partner that would serve as a resource for AV knowledge.

One of the team's most difficult challenges was finding the right solution to extend digital video signals long distances from the matrix switcher out to the video monitors and consoles. Again, Orion Management turned to DVIGear with this challenge. “DVIGear's DVI/HDMI fiber optic cables were an easy and economic solution to the problem,” Cicirelli said. “We worked closely with DVIGear's technical support and sales team to design the right solution for this unique environment. The system works well with third-party equipment and software, such as touchscreens and audio amps. With continued use, our client’s engineers understand and appreciate the efficiencies gained. Both the engineers and management team are quite pleased with the ease of use and the flexibility of the system.”

Through this setup, engineers monitoring the equipment on the spacecraft can share information with each other using the touchscreen, even if the receiving screen is in another room. “This is more than just trying to send one video to another screen,” said Cicirelli.

“We are thrilled to have played a part in this important moment for space exploration,” said Steven Barlow, DVIGear president. “The Orion mission’s objectives are critical to gaining a better understanding of our world and our solar system. This project aligns perfectly with DVIGear's dedication to the advancement and communication of knowledge. We are proud to be part of the team.”