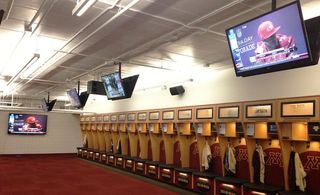 “The school was revamping the locker room and wanted the improvements completed in time for recruiting season,” said account representative, Alpha Video Sports and Entertainment, Darren Whitten. “The existing flat panels and the sound system were underperforming, in part because the system had no subwoofers and in part because the players had blown some of the components by driving it too hard. Also, the system regularly disturbed the coaches and other personnel in the adjoining offices. So they wanted a system that sounded better but that was also limited so that no one nearby would be disturbed.”

The new audio system starts with two iPod docks, a DirecTV input, and a cable input. Those feed the four inputs on the Symetrix Jupiter 4 DSP, which uses the freely-downloaded Sound Reinforcement 5 app to provide modest input conditioning, hard limiting to keep the volume in check, and user control.

Alpha Video & Audio tested various volume selections when they installed the system, and dialed in the limiting so that no one would be disturbed by the players’ music. However, the university’s AV staff expressed interest in being able to make adjustments on their own.

“The Symetrix Jupiter 4 DSP is very easy to set up and very easy to adjust,” said local Symetrix representative, Bormann Marketing, Brad Horbal. “I knew the school AV staff would be able to get into the program and make adjustments without a problem.”

Now that the men’s football team has an updated sound system for its locker room, other University of Minnesota teams, including volleyball, gymnastics, and hockey, are contacting Alpha Video & Audio to get updated systems of their own.