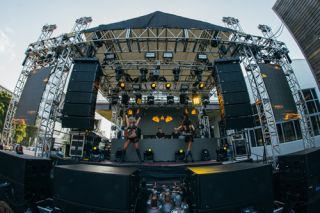 The LYON sound system on the Hyde Beach stage at Miami Music Week.
“The performance of the LYON system is nothing short of phenomenal,” reports Scott Owens, director of production and rentals for AIS. “The first time we turned LYON on, the client almost had to sit down. The total impact is really hard to describe.”

The sound system is part of AIS’s strategy to grow its foothold in EDM and to diversify its business into other event markets. After searching for two years, AIS selected LYON when Owens heard it at Chicago’s EDM-heavy North Coast Music Festival.

“That clinched it,” says Owens. “Every other PA went off the table at that point. I was production manager for that stage, and I remember I almost dropped a cable I was carrying because of the huge impact of a test track being played. LYON is a whole different beast. It is already opening doors that just wouldn’t open for the last couple years.”