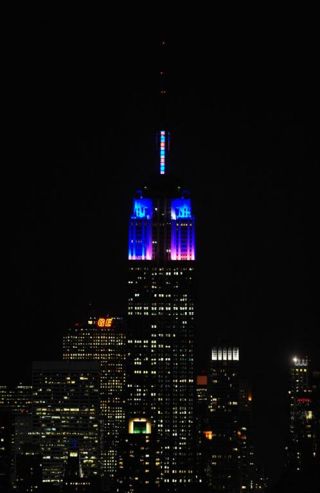 The ESB recently revealed its new LED tower lights with a light show on the Landmark, which was designed by lighting designer Marc Brickman. The display featured six Hippo HD media servers, controlled by a grandMA2 and operated in conjunction with the PCK LSM control system and its associated network. The Hippos drove 11,500 pixel-mapped DMX channels to four types of Philips Color Kinetics RGB and white fixtures located on the building’s top four tiers where they replaced old metal halide and fluorescent fixtures. All four sides of the structure were pixel mapped making the landmark visible throughout the city and surrounding areas.

“It was an honor to work on the project,” said Brickman. “Everyone wanted to try something new and create a special musical show, and we did.”

He explained that Philips “felt they needed enhance their control system” to implement the pixel mapping. “I was familiar with using pixels; it’s still animated light. And the grandMA worked great,” he said.