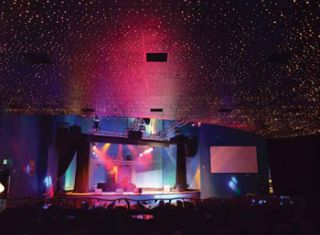 TULALIP, WA—When contracted house audio engineer Erik Otto began working at the Tulalip Resort Casino in Tulalip, WA, owned and operated by the Tulalip Tribe, he immediately instituted plans to upgrade the Canoes Cabaret. “My goal was to create a one-of-a-kind experience for guests that they would not find anywhere else,” Otto stated. “My previous positions working with Cirque Du Soleil and Disney gave me the idea to go for a surround sound approach. After speaking with several vendors, I was not confident they were going to create the experience we were looking for, so I connected with Yamaha Commercial Audio Systems directly, who recommended Clarity Media Group (CMG) of Lake Oswego, OR for the job. Yamaha’s recommendation was based on the quality of CMG’s work as well as their ability to work within tight deadlines.”

CMG was subsequently hired as the design/build contractor to upgrade the audio/video system in the casino’s 480-seat Canoes Cabaret entertainment lounge and chose a NEXO GEO S12 line array and Yamaha M7CL-48ES as part of the club’s main PA.

“Club management knew they wanted 7.1 surround sound and a NEXO line array system,” said Travis Cibolski, co-owner and system designer at CMG. “However, the way they were going about it was overly complex. Mixing and matching various NEXO product would work, but from my experience, the more you can keep the components exactly the same, the better the voicing of the overall sound system. At Clarity, we tend to have a simplistic and precise approach to design and installation. If a piece such as an additional DSP can be omitted from the signal chain, we feel as though that only helps highlight the precision of the design and installation. It is easy to put a system up and overly process it. Our objective is to design it correctly so it does not need to be processed at all to sound naturally pleasing to the ear.”

CMG presented Tulalip Casino with a design using 15 NEXO GEO S1210 cabinets for full range boxes, two RS18 subs flown one per side in cardioid mode, two vertical line arrays for left and right, one horizontal center channel, and four individual S1230 cabinets for the surrounds. “We felt the GEO S12 had many qualities that made it a winner in this situation,” Cibolski explained. “One of those qualities is that it can be used as a single box as is the case with the surround speakers installed around the perimeter of the space. And, the system can maintain the voicing of the main arrays while doing so. The GEO S12 also has several mounting options that made it a good choice for this application as well.”

NEXO NX AMP 4x4 amplifiers were used to power the entire system. “The NX AMP 4x4 is one of the industry’s most powerful amplifiers, but remains cost effective,” Cibolski continued. “It is a DSP and amplifier all in one, eliminating the need for unnecessary A/D conversion. For this install we included the optional EtherSound networking cards to increase the clarity and flexibility of the system.

We also recommended the new NEXO 45-N12 line monitor because we knew the casino would love it. They have ordered more since the install; its control and raw power was very obvious.”

Cibolski said property management expressed that the bartenders in the back of the lounge had trouble hearing patrons order with their existing sound system. “Having used a GEO S12 several times in the past, we knew we could easily control and manipulate the SPL throughout the room by our design. We were easily able to drop the SPL 3db at the bar area, making the bartenders very happy.”

Since the Canoes Cabaret does not have a monitor console, they are using the front of house Yamaha M7CL-48 EtherSound snake system. “All of the components are networked via EtherSound, including amps, which makes adding a monitor desk convenient down the road because of the simplicity when it comes to repatching mixes,” added Cibolski. Canoes Cabaret is also using the Yamaha ASIO Streamer to multi-track the bands right from the digital snake system into a PC and ES100 cards for audio control. The complete system is controlled via an iPad.

As part of the upgrade to the club, the casino has been able to add sporting events with different games on various screens, adding to the usability of the club by increasing patronage and revenues. CMG installed four Da-Lite screens; the main screen is a 1.5 gain/18-foot-wide tensioned Electrol. They plan to add an additional screen to further enhance the HD experience. The projectors are all Eiki 1080p projectors, controlled via an iPad. Cibolski said a key feature of the Eiki projectors is that they feature 35,000-hour cartridge air filters, helpful in environments such as Tulalip where smoking indoors is allowed. The projectors also feature the ability to run very quietly so they do not distract from what is going on in the space. The whole video package is connected via Kramer Cat-5 HDMI interfaces, chosen because most of the sources to be used in the space will be HDMI to start.