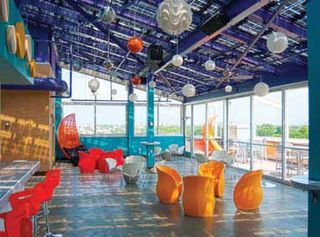 Outputs from an Ashly Pema 8250 feed six Yamaha IF2208 loudspeakers, four Yamaha VS6 loudspeakers for the outside patio, and three Yamaha IS1112 subwoofers at the Moonrise Hotel’s new rooftop bar.Cut from no mold, the unique, 125-room hotel incorporates space-themed décor and a five-star attitude to deliver a one-of-a-kind experience in a neighborhood that is already well regarded for its originality and authentic culture. Half of the Moonrise Hotel’s L-shaped roof served as an outdoor bar right from opening day, and the hotel recently expanded to cover the entire roof. Consistent with its top-flight approach, the Moonrise Hotel hired local live sound and AV integration firm ISI Installations, a division of Ironman Sound Industries, to design and install a great audio system for the extension.

“The owner is well known in the Loop district,” said Chris Schlueter, design specialist with Ironman Sound Industries. “He’s environmentally conscious and also a savvy businessman. He loved the idea of mounting solar panels on the hotel, and, since they could double as a shade roof, it was an easy decision.” The new rooftop bar will mainly be used as a small wedding or event space, so the sound system had to be able to deliver sound from in-house sources and to accommodate a DJ’s output. Importantly, the system had to be “DJ-ready” because the hotel did not want them bringing in their own “five-million watt systems” (Schlueter’s joking words) at the risk of disturbing sleeping lodgers below.

Inputs to the new system include a Yamaha five-disc changer with a flexible USB input, Muzak service, a wireless microphone, and two wall panel jacks positioned at strategic locations, with XLR and RCA inputs each. The inputs feed an Ashly Pema 8250, which includes a comprehensive 8x8 Protea DSP Matrix Processor together with an eight channel amplifier (250W per channel at four ohms) in two rack spaces. Outputs from the Pema 8250 feed six Yamaha IF2208 loudspeakers, four Yamaha VS6 loudspeakers for the outside patio, and three Yamaha IS1112 subwoofers.

“We’re primarily a rental company, but we’re happy to do installations for established customers like the Moonrise Hotel,” said Schlueter. “That said, we can use whatever gear we want. I had recently been introduced to the Ashly Pema series, and I admit I kind of freaked out. I’ve done a lot of mid-scale systems, and the Pema’s capability at its price point is awesome. For a fraction of the cost of other such systems, I can give the client a two rack space solution that contains everything inside a black box. There’s nothing for them to mess up! In addition, the fact that it’s network-ready right out of the box makes it easy to connect in from the Cat-5 jack that we put by each of the two wall panels. For events, I can control the system without having to go behind the bar, where the day-to-day user control is located.”

That day-to-day user control is an Ashly FR-16 remote fader panel. “It’s neat and tidy,” commented Schlueter. “Other user interfaces include menus. I like how straightforward the FR-16 is. Each fader controls the volume and/ or mute of an input source. It’s so simple. And the small but significant fact that Ashly placed the labels behind glass is nice. There’s nothing for the staff to pick off or overwrite.” The system is “user-proof,” so to speak.

Now that the new system is installed, the staff who work in the existing hotel bar are petitioning for the same sort of upgrades. Ironman Sound installed an XLR line that goes back and forth between the two systems so that one bar can listen to the content of the other. “That’s good, but it doesn’t allow independent selection in the old bar,” said Schlueter. “Nevertheless, it’s nice to see evidence that everyone’s excited about the system we put in! Maybe we’ll end up revamping the old bar sooner rather than later?”