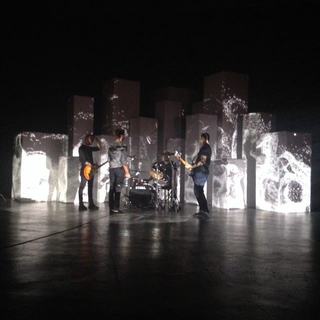 Rise Against's music video "Tragedy + Time"
“Tragedy + Time” is from the band’s latest album, The Black Market, and was directed by Wes Kandel and Casey Hupke of Zoic Studios. It features the band performing against a backdrop of stylized skyscrapers on which lighting effects and moving video images are projected.

“Lightware was there to handle failover. We were shooting straight to tape with no postproduction,” says Froke. “In the event of a media server failure, we relied on d3 to send network switching commands to the Lightware router, which acted as a video signal switch from one server to another. The d3 custom scripting handles automatic failover with less than one frame of delay in the event the main media server failed.”

Froke explains that the innovative music video “was loaded in, programmed, shot and loaded out in under 12 hours with no preproduction and almost no post other than editing. All the color correction, slow motion and framing was done in-camera so the editors simply chose the best shots for each take.”

Froke says that the Lightware MX8x8DVI-Pro “is a seamless and reliable router. You don’t even notice if it switches over. And its advanced EDID management is always useful.”

In addition, “the router’s compact form factor didn’t take up much space. There was a great feeling of relief to have it on board for this music video.”