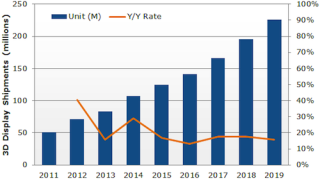 “Despite some industry sentiment that the 3D bubble has burst, we expect 3D to continue to grow across several categories including TVs, portable devices, and public displays,” said Jennifer Colegrove, PhD, vice president of Emerging Display Technologies, NPD DisplaySearch. “In 2008, the 3D display market was under 1 million units and $902 million in revenue. By 2011, it had increased to nearly 51 million units and more than $13 billion in revenue. This is a trend we expect to continue.”

As 3D TV shipments increase, so will household penetration of the devices. NPD DisplaySearch forecasts 3D-ready TV penetration to increase from 10 percent to more than 50 percent by 2019 worldwide, but actual usage of 3D may not move as quickly.

“Our research shows that even though consumers own these 3D-ready TV devices, they haven’t viewed a significant amount of content on them,” said Colegrove. “Before broader adoption can be expected, there is still a need for more 3D content and a smoother set-up process for 3D TV.”

The success of portable game devices with 3D displays, such as the Nintendo 3DS, has shown that auto-stereoscopic 3D (in which the 3D effect is created by the display and does not require glasses to see) is ready for use in commercial products. Moving forward, NPD DisplaySearch forecasts an increased penetration of auto-stereoscopic 3D in mobile phones and DSC/camcorders over the next few years.

Glasses will be necessary for many 3D applications such as TVs and monitors for many years to come due to the limitations and high price of auto-stereoscopic technologies for large displays. However, NPD DisplaySearch expects to see auto-stereoscopic 3D tablet PCs in the market in 2013 (LG Electronics previously produced an anaglyph 3D tablet that required red/blue glasses). In addition, auto-stereoscopic 3D has begun to be used in public displays as a method of gaining attention.

The NPD DisplaySearch 3D Display Technology and Market Forecast Report includes a comprehensive analysis of stereoscopic 3D display technologies and market forecasts through 2019. The report profiles more than 180 3D display-related companies, with a breakdown by technology for the 3D display and the supply chain. 3D image creation and processing, human factors, content delivery and standardization are also discussed in the report.