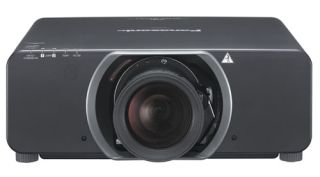 The What: Panasonic unveiled their PT-DZ13K Series of projectors at the 2013 NAB Show in Las Vegas.

The What Else: The new series consists of four models that provide between 10,600 and 12,000 lumens of brightness and a 10,000:1 contrast ratio. Three of the new models offer active 3D projection capabilities.

The PT-DZ13K Series’ Dual Lamp System enables continuous operation even if one lamp fails. Using the Lamp Relay mode allows 24/7 use, as the two lamps alternate in operation, which is useful for demanding digital signage applications.

The PT-DZ13K Series offers a lens memory function that saves settings, such as zoom, focus and lens shift. The projector can be mounted in portrait mode when used with an optional lamp designed for this particular application. The built-in Geometric Adjustment function allows projection onto spherical, cylindrical and other specially-shaped screens.