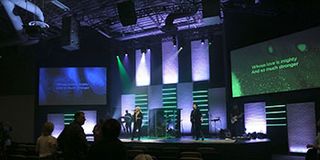 Over the past 36 years, Saddleback Church has grown to be the eighth largest church in the U.S. based on weekly attendance. By the end of this year, Saddleback expects to have added its 17th, 18th and 19th satellites of the church's flagship worship space in Lake Forest, California.

“That really presented a problem when it came to getting even coverage to every seat in the room,” said Greg Baker, global technical director at Saddleback Church.

Project Lead Mark Pearson brought Baker and other church representatives to a nearby location where they had installed an L-Acoustics system in a similar configuration to their plan for Saddleback Church Anaheim. After a few minutes of listening to the system, Baker and the church representatives decided to go with the L-Acoustics system by CCI solutions for their new space.

“The best way to describe it is a ‘left-right-left’ stereo system,” said Baker.

There are three clusters hung along the front of the stage, each composed of two ARCS Wide enclosures flanking one ARCS Focus enclosure. Essentially, those seated on the left side of the room experience a left-right stereo image; those on the right side of the auditorium hear mirror-imaged stereo right-left sound.