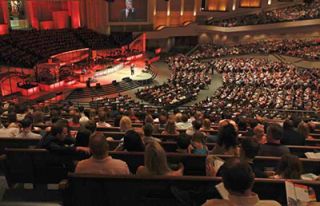 According to Gene Pelland, executive vice president of corporate sales for Clair Bros., the church had outgrown the capabilities of the point-and-shoot audio system that had been installed when the building was completed in 1998. The search for a replacement system was over when Clair Bros. arranged for church leaders to see a Sting concert featuring the company’s proprietary equipment.

“They pretty much came back saying ‘That’s what we want in our auditorium.’ They could have bought less dynamic equipment but they wanted the very best that we could offer,” Pelland said.

“Their video system has gone through numerous upgrades, but it was time to bring the audio system into the 21st century. The system backbone needed to be scaled to make sure it would have the flexibility to handle the various production demands,” elaborated Jim Devenney, system designer for Clair Bros., referring to the church’s large-scale holiday productions. The Christmas show, for example, typically includes a 48-piece orchestra, 350-member choir, praise vocalists, actors, comedians, and even the occasional camel.

Previously, reported Pelland, “The noise from the stage monitor system blasting into the choir seating area would interfere with the choir monitor system. We put in a very high articulation choir system so that they could hear what they needed to hear. The combination of the 12AM monitor system, which allowed for less noise on the stage, and the Roland ear system on the stage, plus the addition of the 15CXs and R2-Ts over the choir, helped solve the problem.”

Studer Vista 5 M2 42-fader consoles were installed at the FOH and monitor positions and a Vista 9 was installed in the HD broadcast facility. “The D21m satellite is the backbone of this design; we have three racks with three D21ms in them, loaded with 40 channels of mic pres with a three-way passive split,” Schutz said. “We otherwise would have had to install an extensive copper snake system with multiple patch points throughout the stage to accommodate all of the inputs needed for a service.”

Representatives from Studer visited the Clair Bros. manufacturing facility to update firmware and pre-commission the console systems. Schutz and Escobedo also flew in for training and to program the consoles.

“We only had four days to cut over from the existing digital consoles to the Studers, so we felt it was critical to get these tasks done prior to the short window of time available onsite,” Devenney explained. “We were able to set up the entire Studer system in our shop and test all 1,800 analog and AES inputs and outputs as well as the Roland and two Avid Pro Tools rigs that were part of the system.”

Because Prestonwood attracts so many worshippers every weekend the church could not be without a sound system in the sanctuary. “We were able to supply a large portable system for the church to use during the removal of the existing system and installation of the new system so they could stay ‘online’ at all times,” Devenny said.

The upgrade of the production studio was notable for being the first implementation of ZR Prefab acoustic treatment panels, a collaboration between Clair Bros. and acousticians Delta H Design of Culver City, CA. Clair Bros., led by site supervisors Dave Walker and Ron Sadd, stripped out the studio and rebuilt it using ZR panels, manufactured in Manheim, for walls and ceiling. Custom-sized panels were built at the Clair warehouse in Dallas, TX.