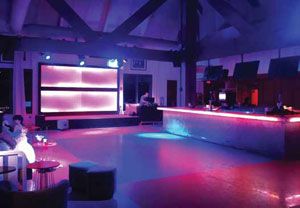 PORT ST. LUCIE, FL—The Florida sunshine entices visitors from around the world, with resorts and destinations dotting the shorelines and stimulating interior metropolitan areas. Port St. Lucie is among the abundance of interior destination cities, with Club Med Sandpiper Bay serving as its premier resort. The 400-square-mile resort offers a variety of sports, programs, and activities for all ages, including three pools, two golf courses, and a collection of clubs, restaurants, and a theater.

Recent construction has brought new life to the resort, including new audio and video systems across interior and exterior spaces. Axxentos, a systems integration company based in Fort Lauderdale, FL, designed and installed the systems. Oliver de Kegel, owner and president of Axxentos, was tasked with producing a comprehensive and mostly centralized AV system while working within a strict budget—all while dealing with the general resort construction happening in parallel.

Club Med Sandpiper Bay had long been operating multiple “mini-control rooms”, with headends scattered across the property. The move away from a fully analog system created the thirst for a more centralized model.

The most obvious design characteristic tied to the centralized concept is the choice of 70-volt audio systems across various zones. Axxentos installed new Technomad 70-volt loudspeakers in multiple zones, most with local amplification, but all ultimately tying back to the main control room near the bar and conference room areas.

“The 70-volt audio system pumps background music to the bar, the lap pool, and the arrival area, which occasionally become the audio sources for full-blown entertainment events,” said de Kegel. “It can quickly go from quiet volumes for reading by the pool to a nightclub environment with pulsing techno music, dancing, and professional lighting.”

The bar area features 10 Technomad Vernal loudspeakers— the smallest model in the Technomad portfolio—tied to an Atlas AT 10 auto transformer for volume control. Two Technomad Berlins—the largest loudspeaker in the company’s range—power the pool system.

“The 70-volt speaker configurations were really for environments where we needed two or more speakers in line,” said de Kegel. “The move to a centralized model meant many of the new loudspeakers were a good distance from the control room. So 70-volt was really the only way to go.”

Axxentos chose Technomad for both the availability of its loudspeakers in the 70-volt configuration, as well as sound quality and durability.

Axxentos also added amplified QSC ceiling speakers in the bar area to fill out the sound. A second audio zone in the bar is devoted to live music and DJs. Club Med personnel can connect the two audio systems so that live music from the stage plays over the background music system.

The audio systems are primarily reserved for leisure and entertainment, but the overall project included several conference room systems targeted for weddings and corporate events.

“Before we started, the resort had nothing but four rooms and separation walls,” said de Kegel. “We now have a matrix system with a line input and a mic input in each room. You can tap into the system if you just need a microphone for speeches or presentations. Alternatively, you can tap into the main control room system to pump in background music for weddings, or plug in a mobile audio system to the line input for a DJ.”