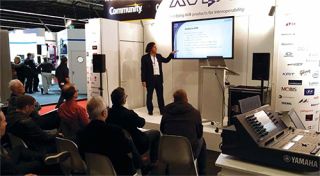 IEEE open standard simplifies integration and interoperability. But are there limits?

Beyond allowing multi-vendor AV components to be networked together over IP, AVB’s real claim to fame is its ‘Bandwidth Reservation’ feature. The merger between audiovisual technology and IP networks is no longer a forecast: It’s a fact. With this merging of technologies comes a demand for quick-and- easy component additions, set-ups, and management. Some AV technicians yearn for the now-past analog days when one device could be plugged into the other, and everything just worked.

The Institute of Electrical and Electronics Engineers (IEEE) has already tackled the issue of IP-enabled, digitally based AV equipment integration, communication and control by creating the AVB set of technical standards. Short for Audio Video Bridging, the four AVB standards collectively support the deployment of multi-vendor two-way audio/video systems over IP, with minimal latency and jitter, and — most important of all — guaranteed connectivity between AV devices over their common LAN/WAN.

Ongoing efforts to create and promote AVB-certified interoperable AV products are being spearheaded by the AVnu Alliance (www.avnu.org), It is an industry/installer group that includes heavy hitters such as Barco, Biamp, Cisco, Crestron, and Revolabs, among many others. At this point in time, vendors such as Extreme Networks and NetGear are offering AVB-compatible bridges (network switches), to allow existing wired networks to be converted to AVB compatibility and signal carriage. Many other AVB-enabled products are also available.

The big question for AV Technology readers: Is 2014 the year to move their networks from proprietary architectures to open standard AVB — or not? That’s a question that can be answered on a case-by- case basis, using the AVB pros and cons insights offered here.

The Case for AVB

Beyond allowing multivendor AV components to be networked together over IP, AVB’s real claim to fame is its “Bandwidth Reservation” feature. This is in addition to the “intelligence” of AVB-enabled bridges/switches, all of which have onboard software/firmware that handles network setup, configuration and management.

“An AVB network contains AVB bridges (network switches) that are aware of AVB traffic, and can set aside up to 75 percent of the switches’ bandwidth for streams using MSRP (Multiple Stream Registration Protocol),” said Steve Seable, systems application engineer with Yamaha Commercial Audio Systems. “This means that audio and video over an AVB network have a space reserved for them,” Seable explained. “Other data cannot override them and cause audio dropouts, or video degradation.”

Bandwidth Reservation stands in stark contrast to the “Best Effort” approach to adequate bandwidth provision popular with most IP network operators. “In the Best Effort approach, AV gets whatever bandwidth happens to be available, whether it is sufficient or not,” said Revolab’s CTO Timothy Root. “It’s like a freeway: If there’s too much traffic, you get traffic jams — that is, signal dropouts and latency. Meanwhile, coping with the problem by adding capacity is only a band-aid at best, because expanded networks tend to inspire the creation/adoption of new applications that eventually consume the extra capacity made available.”

“Another big advantage is that with an infrastructure of AVB switches in place, adding new devices doesn’t require adding infrastructure,” said Justin O’Connor, Biamp’s product manager of audio systems. “They are as close to ‘plug and play’ as we have in today’s AV-IP networks, saving IT managers a lot of time when new components have to be added.”

In January of 2014, Crestron announced its membership in the AVnu Alliance. “Our commitment to standards makes us the perfect candidate to join the AVnu Alliance to ensure interoperability among networked AV devices and provide the highest quality streaming AV experience,” explained John Pavlik, Crestron’s director of architecture and design, in a company news release.

One month later, Crestron announced that it has licensed Audinate’s Dante media networking solution. The deal will let Crestron use the proprietary Dante digital audio and control platform to interconnect its products. “We have selected Dante because it has become most widely adopted media networking technology,” said Pavlik in another Crestron news release.“ Dante is a proven networking technology that already has an ecosystem of hundreds of OEM products in the market with tens of thousands of installations worldwide.”

Why the license? “For us, it is about being able to use existing network infrastructure,” replied Dave Silberstein, Crestron’s director of commercial marketing. “There are few switches that support the AVB advantages at this time. The broadcast people can dictate their infrastructure; those of us that live in the commercial world cannot.”

When considering the role of and or migration to AVB, it’s also smart to examine products that provide the most flexibility when dealing with both analog and digital hybrid systems. “We all want to service our customers and provide them what they need,” said O’Connor. “AVB isn’t going away, and our industry will continue to evolve around technologies, which is why we introduced a card to enable Dante and AVB to work together, seamlessly — and offered it in the same chassis. There’s no flipping back and forth between digital to analog to digital again.”

To Jump or Not?

The 2013 Ballet Russes exhibit at the National Gallery in Washington DC, “Diaghilev and the Ballets Russes, 1909–1929: When Art Danced with Music” was created using AVB-enabled AV components. The exhibit was not only a major success for the Gallery, the tech team felt confident in the flexibility and reliability of the AVB system. Meanwhile, Biamp has done “successful AVB installations at the University of Wisconsin-Eau Claire, the Birmingham Public School District (Alabama) and the Denver Museum of Science and Nature,” said O’Connor.

“So, although AVB-enabled AV components are not yet as numerous as those supported by proprietary standards, they are out there — and more are being installed every week.”

The big issue for AV managers is whether to move to AVB or not, when it is time for a major network update/upgrade. From an ROI (return on investment) standpoint, “AVB capable chips are less expensive typically than proprietary chips, so theoretically there should be some cost savings,” said Steve Seable. But product cost is not solely dependent on a single piece of silicon. “There are many development factors that will weigh into the final cost of a product,” he added.

There is also the need “to have AVB switches on any links that will have AVB traffic,” he said. “Another consideration is bandwidth: AVB can allocate up to 75 percent of a link’s bandwidth to AVB traffic, so you should be aware of bandwidth and make certain you allocate enough headroom into the system to accommodate other traffic if the network is planned to be converged.”

Deciding for or against AVB is very much a case-by- case decision, governed by an AV/IT manager’s requirements and available budget. One thing is certain: for AV managers who want Reserved Bandwidth, easy installation, open standards, and easy scalability, AVB is the way to go.

* Biamp’s Tesira is a group of digital signal processors that are configured to support AVB. The Tesira family line includes the Server (which can be deployed as a redundant pair), the Server-IO, and TesiraFORTÉ. Each one offers different networking capabilities for different installation environments.

To allow media facilities to take advantage of the AVB standard in the monitoring realm, whether now or in the future, Wohler Technologiesis offering a new AVB Monitoring Option card for the company’s AMP2 Series modular audio/video monitoring solution, including the acclaimed AMP2-E16V system.

Once the card and software update are installed on the AMP2 Series unit, AVB channels can be mixed, level-adjusted, and monitored alongside AES, SDI, analog, and other input types, and in the same fashion.

“AVB promises compelling benefits including simpler network infrastructure, lower implementation costs, unified management, and the ability to deliver current and next-generation video and audio applications with high quality of service,” said John Terrey, vice president, sales at Wohler Technologies. “We are making AVB support available within the widely used AMP2-E16V audio/video monitor to assure that Wohler customers have an economical and practical means of taking advantage of this important standard.”

The Wohler implementation of AVB is unique in that AMP2-E16V monitoring units already deployed in the field may be upgraded easily to support AVB. No additional dedicated system is necessary. Rather, as a result of the series’ modular design, users can add AVB support via a 100 Base-T Ethernet port and familiar RJ45 connection when needed. Just like any other module for the AMP2-E16V, the AVB card occupies a single card slot. Because users can add AVB inputs without losing any of their other inputs, they retain the full power and flexibility of their AMP2 monitoring systems. Each AVB Monitoring Option card decodes two AVB streams of eight channels each (IEC 61883-6 format), and these two streams must be locked to the same media clock. outputs or re-embedded within an SDI stream. Going forward, those Wohler customers who employ the AVB card will be able to update its firmware just as they would the firmware for any other I/O module.