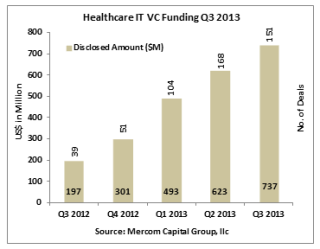 While the 2009 HITECH Act helped launch the sector through its $17 billion allocation towards the adoption of meaningful use of healthcare IT, private investments into the sector have continued to rise with increasing EHR adoption. Release of healthcare data by the U.S. Department of Health and Human Services has also contributed to the growth of healthcare products and applications focused on consumers.

“Funding into Healthcare IT is on pace to double over last year,” said Raj Prabhu, CEO of Mercom Capital Group. “With major parts of the Affordable Care Act on the horizon, the focus is on health insurance exchanges, preventative care, wellness, population health, and a general shift from quantity to quality of care, which is reflected in this quarter’s funding transactions.”

Healthcare IT disclsoed M&A transactions Q3 2013.
There were only six disclosed M&A transactions in the third quarter, including the $644 million merger of Greenway Medical Technologies, a provider of an EHR, practice management and interoperability solution platform, and Vitera Healthcare Solutions, an EHR and practice management software provider; the $200 million acquisition of Medical Management Professionals, a medical billing and practice management company (subsidiary CBIZ), by Zotec Partners; and the $200 million acquisition of Cardiocom, a developer and provider of integrated telehealth and remote patient-monitoring services, by Medtronic. The Advisory Board Company acquired Medical Referral Source, a web-based software program that streamlines patient referrals from primary-care doctors to specialists, for $11.5 million; and IMS Health acquired Diversinet, a provider of secure, patented mobile technologies and connected health solutions for healthcare organizations and partners, for $3.5 million. Also in Q3, Mastech Holdings’ Healthcare Unit was acquired by Accountable Healthcare Staffing for $1.15 million. There were a total of 412 companies and investors mentioned in this report.