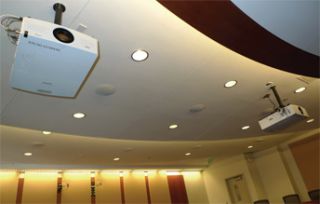 Ramping Up Classroom 2.0 At The Georgia Institute Of Technology

Video projectors in higher education classrooms have been with us for long enough that it seems the penetration should be 100 percent by now. Not so. Nationwide, many colleges and university systems are still struggling to find the budget for basic projection systems beyond just their main teaching theaters.

Then you have institutions like the Georgia Institute of Technology in Atlanta, GA, which boast that indeed, 100 percent of their classrooms have projectors installed. Furthermore, in-house AV staff have said they’re pushing for two projectors in each classroom. Combine that sentiment with the fortuitous development that Sanyo just rolled its three millionth projector made off the assembly line, add in one of the country’s top AV integrators, and you have a formula sure to please integrators and suppliers.

Last month, Sanyo celebrated the manufacture and shipment of its three millionth projector by donating it to the Georgia Institute of Technology for integration by AVI-SPL into a “mock up” of its Second Generation of classrooms (also called Classroom 2.0). AV/IT staff, faculty, and students will use the Second Generation classroom in real teaching situations to determine the best designs for future classrooms in the Clough Undergraduate Learning Center (CULC) building, which will open in the fall of 2011. The presentation of the Sanyo projector took place October 8 on the Georgia Institute of Technology campus, and was attended by top executives from Sanyo North America, integrator AVI-SPL, and members of the university’s AV and IT and staff.

According to Chris Hamlin, technical project director, Georgia Institute of Technology, numerous forces were at work behind the Second Generation classroom initiative. “We first conceived the idea of reevaluating the way we place technology in the classroom based on two main factors: To reduce the number of interconnections between the room, podium, and wall rack—to reduce the total number of possible failure points as ATS was reporting issues primarily related to podium connections; and to reduce the overall footprint of the lectern, based on feedback from conversations with faculty and space planning both at CULC meetings and just in general interactions.”

This led to an invitation to Waveguide Consulting of Decatur, GA, because, according to Hamlin, “They had recently installed a new classroom surprisingly using a number of the same concepts we had been discussing. The next driver was a real desire to ‘hide’ the ‘black box’, the wall mount equipment rack we use in most rooms, which was something we were already considering and working into the design for the a renovation in one of our teaching theaters.”

Soon after, Hamlin and team secured funding for the Second Generation classroom to be set up in the Engineering Science and Mechanics Building on the Georgia Institute of Technology campus. Next, Sanyo stepped in to donate the first piece of gear on the project, the PLCWTC500L.

“It was a great opportunity to share this milestone with our dealer AVI-SPL on the Georgia Institute of Technology campus,” said Sam Malik, director of marketing for the Presentation Technologies Group in SANYO North America’s Consumer Solutions Division. “This year marks both our three millionth projector sold and our twentieth anniversary in developing innovative, leading edge projectors.”