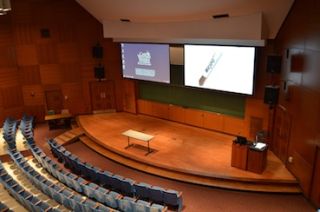 The company recently has been involved in an ongoing project to upgrade existing analog AV installations in classrooms at Case Western Reserve University in Cleveland.

“We’ve been refreshing a lot of their older AV systems which isn’t uncommon given newer digital technology and the industry having evolved from coaxial to the twisted pair and IT world," said Dobil AV sales engineer David Rosenberger. "We’re getting more into network switchers and control processors and we have to power cycle or reboot these types of devices, whether it’s a power spike or some of the more consumer-based network switches that don’t always cooperate with our systems.”

Fortunately, Middle Atlantic Products’ RackLink power management system has proved to be a valuable asset in coming to terms with these problems.

“RackLink is not only great for us,” Rosenberger points out, “but also a big help for on campus support because the CWRU technicians can go to the phone app and choose to reboot whatever piece of gear they want to. It’s amazing. The troubleshooting response time is drastically reduced and if something does go wrong, we can log in and see exactly what the problem is, for example, if it’s a power spike. That alone is huge for us, which explains why we’ve been including RackLink into every one of the systems we’ve been putting up there, and we’re up to 40 systems by now.”

Dobil’s classroom systems for Case Western Reserve typically include a Crestron Digital Media system capable of multiple digital and analog sources. These include digital and analog laptop inputs and a digital PC input that feed into the 8x8 Digital Media matrix switcher. A Crestron V-15 (15-inch HD touch panel) functions as the user interface that controls the entire system. Dobil also uses an Epson G5750 projector to get the digital 1080p signal to the screen and every room is connected to Crestron’s Fusion remote management software. Now each system also includes the protection, cost and time saving provided by RackLink.

Intelligent power management and monitoring with remote and local access are key says David, “because we want to protect our client’s investment in the high-end systems they’ve put into their classrooms. We want to make sure that we can protect against something as basic as a power surge or lightning strike.”

“These are existing buildings, and we have no idea what the quality of the AC service is,” added Dobil CEO and president Don Rosenberger. “So that leaves us on our own to safeguard the equipment we install and ensure that it will work. RackLink provides protection and also lets us reset the router, the processor, whatever piece of equipment happens to lock up. All digital electronics are sensitive and don’t respond well to spikes, noise and surges. We rely on RackLink to protect the gear and cut down on our maintenance visits, which reduces classroom downtime.”

“Time savings also are important,” added David. “Instead of having to send out a tech across campus, RackLink will show them that a certain room isn’t functioning or getting audio, or the touch panel in that room isn’t communicating with anything. Then they just have to log onto the app, reboot the processor or touch panel and they have a solution without the 15 or 20-minute response time just to get to the room.”

“These problems have existed for a while, but no one made a product with all of the elements in one piece,” said Don. “There were other units where you could recycle the sequence or the AC. There were filters and monitoring units, but no one put it all in one rack unit. We band-aided three different manufacturers’ units together but that was a clunky solution. Middle Atlantic has done it in one box with all of the stuff we needed and it works simply and easily.