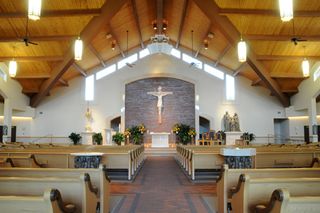 Find The Audio Line In A House Of Worship Budget

The Church of the Incarnation in Mantua, NJ, uses Community Solutions SLS920 three-way loudspeakers to cover the sanctuary. They are augmented by a single SBS22 subwoofer.

It’s not just the who, what, where, and when, but for many integrators it’s the HOW. Just as in other industry segments, the house of worship market hasn’t been immune to the vagaries of the economic climate.

In some ways, the audio business climate hasn’t shifted much differently from that of any other organization that has had to learn to closely monitor and re-prioritize its spending to control costs, said John E. Loufik, III, senior applications engineer, Community Professional Loudspeakers, Chester, PA.

“Major HOW upgrades or new systems are usually funded as special projects, targeting technology upgrades much like capital improvements in other businesses,” he said. “Very rarely will any borrowed money be involved unless the new system falls within the scope of a much larger building fund.”

Audio systems remain present in regular ministry budgets for on-going maintenance, but the numbers are generally just smaller where budgets are shrinking overall, Loufik said. “On the other hand, I have had some contact with churches which have maintained attendance growth and are seeing increased cash flow. So long as that cash flow has grown in proportion to the attendance and the demand for services such as ministries, these congregations have not been as hesitant to make technology investments. Organizations blessed in this regard are probably in the minority, but that’s true even in good times.”

Yet with the recession starting at the tail end of 2008, tithing and offerings have been down and a lot of churches have postponed renovations or, in some cases, new buildings projects, said Gene Houck, national sales manager, Audix microphones, Wilsonville, OR.

Flexibility is key, he said. “Rather than scraping projects altogether, some churches are deciding to make improvements on a smaller scale. Integrators who are willing to lower the scope of the entire job can be crucial in guiding the client in which areas are essential. It is kind of a ‘bird in the hand’ philosophy but relationship is maintained and in many cases the original project does get completed, albeit in stages.”

When determining what areas are more crucial than others, Houck has some advice. “We always say, when doing audio renovation, don’t compromise your transducers. They convert sound into electrical energy, microphones, and then take that electrical energy or signal back into acoustic sound, speakers. In other words, the first and last link of your signal chain is crucial. When it comes to microphones, bad sound in means bad sound out. For example, if all a church can afford is to upgrade their microphone quality and selection, then that should be done. It will go a long way on improving the audio quality of their worship service.”

The clearest trend has been an uptick in Value Engineering (VE) of system designs to meet a particular budget or to trim expenditure fat, Loufik said. Since turn-around time from design to installation can be lengthy, a system designed with a premium loudspeaker product may no longer fit the financial package available when the church is ready to implement the system. Accordingly, we have seen an increase in requests to help re-evaluate project designs to find ways of achieving similar results with lower cost or fewer products. Designers have to find ways to squeeze maximum performance out of less gear to get the main job done.

To do so, he said, audio system designers should evaluate the role of each loudspeaker in the system along with all of its supporting amplification, cabling, rigging, and processing. “Anything that can be cut gets cut, and any performance specs that aren’t essential get re-evaluated. Often this results in a system that might offer similar sound coverage, but at a lower SPL. So long as the SPL provided by the VE system will suffice without risking overuse of the driver components, the client will often gravitate toward the VE proposal. Many times the real motivation for making a VE design change gets its momentum from a perceived need to build a system even if it’s not the system the client originally envisioned.”

There’s an increase in clients seeking American made loudspeaker equipment, Loufik said. “They want assurances that the products are locally made, contain a minimum of imported parts, and will deliver long-term quality. Despite the higher price range often associated with American made loudspeakers, I have had some end users indicate that they will ‘find the funding’ for the project just because they value the investment in American made goods. Some have said that they might garner more support within the church organization when they indicate they are buying a domestically made product. Community offers domestically produced products that address lower cost with higher value which makes for a unique advantage—even against higher priced competitors.”

Loudspeaker components become part of the architectural landscape and require careful planning in order to clearly address the audience. “Ask yourself how often you want to drag a lift or scaffold into your church and start drilling holes in things to setup a new loudspeaker system,” Loufik said. “There are other components in the systems that are far more accessible and easily upgraded as needs dictate. Examples include mixing consoles, rack equipment, microphones, and periphery gear. So, even in tight economic times, it’s worth making sure that hard-to-install items are given added weight in the budget.”

When it comes to line arrays, for the HOW and audio market in general, everything old is new again, he said. “Early line array adopters seem to be rediscovering horn-loaded loudspeakers. Economic pressure on certain projects has accelerated this trend, but it just seems to be part of the changing tide of audio fashion.”

In the frenzy to provide the latest and greatest regardless of proper application, line arrays have become over-applied and horn-loaded loudspeakers became less popularized. “The paradigm shift has also required enormous effort in the industry to educate professionals and end users about the technology,” Loufik said.

Line arrays have received center stage attention in sales presentations, educational articles, seminars, and print media, he noted. “They’ve made a big splash and they are here to stay as they truly do solve certain problems very well, especially in HOW venues where the acoustics can be very challenging. Line sources excel at controlling their vertical dispersion pattern and, therefore, can generate very intelligible sound in highly reverberant acoustic spaces. For many HOW clients, this offers the opportunity to build an audio system that doesn’t rely on acoustic treatment to be successful. Unfortunately, most line sources use direct-radiating components that require enormous amplification power to operate at levels needed for a given venue. It’s audio by brute force. Many require sophisticated DSP in order to control their output appropriately—especially in steerable systems. All of this adds up monetarily very quickly.”

Loufik said system designers have quickly figured out that in many cases sufficient pattern control and perhaps more SPL can be achieved with well-designed horn-loaded loudspeakers that only require a fraction of line array’s amplification. “For example,” he said, “a compact three-way line source made by Community offers extremely high directivity control, but also needs over 3,600W to achieve full output (120dB, 1W/1m). Conversely, a similarly priced fully horn-loaded model that offers the most pattern control in its class requires only 200W, but can also achieve about 10dB more maximum output (130dB, 1W/1m). This translates into significant system savings.”

In a similar way, the VE trend has affected line sources where the more sophisticated, steerable systems exceed budget. In these cases, the steerable array was probably specified to generate a carefully controlled output pattern, Loufik said. “A line source might still be needed for the sake of providing high intelligibility. But, a mechanically aimed, externally powered array with a similar form-factor many times can be substituted and meet the same intelligibility marks. As an added benefit, this type of system locates the amp/DSP in a rack which makes servicing far more accessible. Some consultants have indicated they prefer this approach when possible because of the cost savings and the reduced complexity.”

Patience is a virtue that applies to the HOW market. “It helps to be patient with your client and to express your empathy for their financial situation,” he said. “Be prepared to turn on your creativity to provide a system that gets the job done even if it doesn’t meet the expectations to which you normally aspire. Solve problems within budget and with quality gear and the client will likely respect you and be more inclined to consult with you in the future. Be sure to clearly document the system proposal, especially if it has been downgraded in a VE process.”

At the same time, insist on following best practices, especially concerning safety. “Making compromises on a rigging design or wiring path may save on budget but can increase liability exposure,” Loufik said. “Regardless of economic climate, I always remind clients—particularly owners—that they are wisest to make the right equipment investments in the parts of the system that are the hardest to upgrade. Suspended loudspeakers, rigging/mounting systems, and wiring paths, etc., often require significant labor and support equipment in order to accomplish the installation properly and safely.”

When working with clients on a restrained budget, integrators need to be very careful not to recommend equipment changes that could not only be more technology than they can afford but also more than they can operate, Houck said. “I know of more than one church that has moved from digital mixers back to an analog solution because of operator issues. It’s costly to change horses mid-stream. The message for integrators is to know their client’s capabilities on a technical level. Churches have improved their tech capabilities dramatically over the past 10 years but most operators are still volunteers, and if they can’t operate the system you might be doing the client a disservice.”