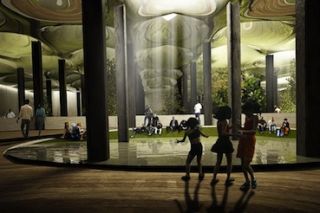 Along with the lighting, greenery and architecture, the goal was to emulate the sonic environment people would experience above ground. To accomplish this, Alban Bassuet, venue and acoustic consultant at Arup envisioned, designed and installed a 3D sound system comprised of 16 wall-mounted JBL CBT50LA-1 column speakers and eight Control 25AV compact indoor/outdoor speakers throughout the space, all powered by three Crown ComTech DriveCore CT8150 amplifiers. Dash 7 Design, a creative design and fabricator firm in New York, helped with constructing the installation.

Anne Guthrie from ARUP composed the soundscape for the installation, which features music, trains, birds and children playing and other sounds, all filtered, processed and manipulated by Guthrie. The multichannel soundtrack was processed, recorded and played back using proprietary programs written for Max-MSP using Ambisonics, delivering a 3-dimensional sound field.

“We chose the JBL CBT50LA-1 loudspeakers for a number of reasons,” said Bassuet. “The exhibit space, which measures about 200-feet long, 60-feet wide and 18-foot high ceilings has a lot of natural reverberation. However, in order to successfully use Ambisonics, the sound from the speakers has to be focused and the speakers have to be accurately aimed. The CBT50LA-1 has a precise coverage pattern, which kept unwanted reverb to a minimum and the sound field seamless.”

“In addition, the CBT50LA-1’s’ wall-mounting angle bracket proved to be a very useful feature. The bracket enabled us to precisely aim the speakers and get the Ambisonics to work. The system really immerses you in the sonic environment and the mood created by the composer.”

The exhibit, which ran from September 15–27, is located at the Essex Street Warehouse on the corner of Essex and Broome streets in Manhattan. Striking in design with sweeping, organically curved ceiling sections, the exhibit has a remote skylight system, inviting seating areas—and an abundance of trees, grass and plants.

On the kid’s day, an iPad and wiimote interface designed by Terence Caulkins and Joseph Digerness from ARUP were given to kids from different visiting schools to move sound in 3D across the entire system, which was very popular and a successful way to engage with the kids and raise their awareness of sound and space.

“The ‘Imagining the LowLine’ exhibit is a major part of helping to popularize the idea of LowLine,” said Bassuet, who noted that a feasibility study would be submitted to New York’s Metropolitan Transit Authority (owners of the Williamsburg Trolley Terminal) in January 2013. “LowLine underground is not only a great public gathering space, but with its columns, walls and ceiling it also offers the possibility to build an audio-visual infra-structure which could support a number of diverse installations and events. It’ll be a wonderful addition to one of New York’s most culturally diverse neighborhoods.”