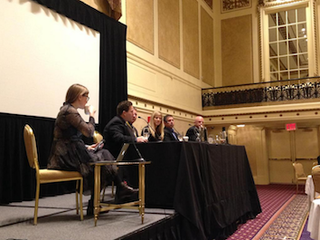 It seems like every week we’re hearing about new uses (and misuses) for drones. Wedding photographers are hooking up cameras to drones to take photos from above; videographers are shooting B-Roll; police are using drones to survey areas where helicopters can’t go; and it’s about time the AV world started getting its hands on drones too.

Probably the biggest piece of information to take away from the panel discussion was the importance of using drones legally—as Ellman pointed out, it’s currently illegal to use drones for commercial use, however the government is working on legislation that would allow companies to use drones for that purpose, but to get there could take a year or more. However, the 333 exemption would allow companies to use drones if they can meet the specific criteria set up by the U.S. government.

“A drone is still considered an aircraft by the federal government,” Ellman explained, saying that to get the exemption, you need to prove how, for example, the drone can still meet the safety requirements for a manned aircraft in a way that is logical.

“There’s always two things we can do to satisfy the current legislation,” added Bivetto. “It’s both technical and practical.”

One big requirement for current drone use is to fly the aircraft 500 feet away from people at all times. Bivetto said that to meet this, you can install special sensors to the drone, just as a second precaution.

The UAS is also working to change the requirement on pilots for drones—currently, it is still required to have a licensed private pilot, but soon you can take a course through the UAS to become licensed to fly unmanned vehicles.

Kelly said that for now, AV professionals looking to add drones to their services can start at the hobby level, and eventually grow into the commercial uses as the laws change.

Stampede, the University of Unmanned Vehicles, and InfoComm are also teaming up this year to bring the new Drone Pavilion to the 2015 InfoComm Show (June 15-19, 2015, in Orlando, FL) so you’ll have another chance to explore drone uses in AV and learn more about how to apply drones to your company.