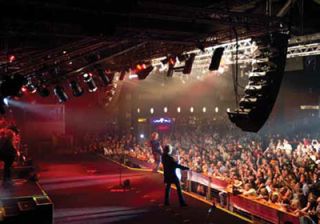 The design for Wild Bill’s comprises two hangs, flown left and right above the 50-foot by 20-foot stage, each configured with a combination of six Bose RoomMatch modules that individually offer coverage patterns ranging from 55 to 120 degrees horizontally and five to 20 degrees vertically. Georgia-born country music artist Bill Gentry had already built a significant underground following in the Southeast for his high-energy live shows when he opened Wild Bill’s, a dance club and concert hall located within a 72,000-square-foot former big-box retail store in the northeast corner of the Atlanta metro area in 2003.

Having celebrated a decade in business earlier this year and played host to the likes of Brad Paisley, Keith Urban, Toby Keith, Brooks & Dunn, Rascal Flatts, Miranda Lambert, Trace Adkins, and—sometimes several times a week— Gentry himself, the 5,000-capacity venue recently underwent a significant upgrade to its house PA with the installation of a Bose RoomMatch Progressive Directivity Array system.

According to Dan Korn, head of production for the venue and a “road dog” for the past couple of decades, including 14 years at the 40 Watt club in Athens, GA, and seven years touring with Athens-based band Of Montreal, Wild Bill’s was due for an upgrade. “Our old system was definitely antiquated. It was also set up completely improperly,” he said.

Fortuitously, a former colleague at the club was familiar with Bose Professional Systems Division and its RoomMatch array module loudspeakers and suggested the club consider the system.

RoomMatch, as the product name suggests, is designed to be custom configured via Bose Modeler predictive software. Korn recalled that, when Bose field engineer Bruce Hurst made his first site visit to Wild Bill’s, “I had to pull out blueprints and take measurements of the room. He took all of that and put the whole room into CAD, and then we decided where we wanted the sound to go—because their ability to direct sound is just insane.”

The design for Wild Bill’s comprises two hangs, flown left and right above the 50-foot by 20-foot stage, each configured with a combination of six Bose RoomMatch modules that individually offer coverage patterns ranging from 55 to 120 degrees horizontally and five to 20 degrees vertically. The result meets the venue’s requirements for both maximum SPL and a well-defined coverage pattern.

“One of my requirements was that I needed a house system that could do 120 dB, C-weighted, at front of house. It’s what touring engineers ask for. Without subs I can do 116 dB at front of house, undistorted. When you put subs in the system you hit 120 dB, no problem. So I’m happy,” said Korn.

Bill "Wild Bill" Gentry With the previous PA, staff at the bars on each side of the main room could barely hear their customers. Now, he said, “It’s an easy 12 to 16 dB drop off before you get to the bars. I can be at 104, 108 dB on the dance floor, but when you’re at the bar it’s 92, 94 dB. The bartenders have been happy about that.”

In fact, the new RoomMatch system is so directional and offers such good rejection behind the array that Korn was able to repurpose the old rig into side fills. “We’re pushing our monitors to the max, because it’s so quiet on stage now. Performers don’t even know that the PA is on!”

The previous rig required 15 amplifiers; the new system needs just six Bose PowerMatch PM8500 amplifiers. “Those amps just run so efficiently. They barely even warm up, ever… The protection circuit is just outrageous; those amps are not going to allow themselves to get to a state in which they will break. I redlined them for four hours straight for a techno night, and they never gave up.”

The club got the new rig installed just in time for a big show, then brought in Bose’s system techs to tune the system. “They spent a few hours doing all kinds of sweeps, and pink noise and white noise. Eventually Bruce said, ‘Dan, come out and listen to this.’ They pressed play and—holy moly! It was just phenomenal.”

Wild Bill’s sound system currently includes multiple sets of delay speakers covering the upper mezzanine levels, including VIP areas, but with the successful implementation of the RoomMatch rig, said Korn, “We’re talking to Bose: the goal is that at some point it will be a full Bose room.”