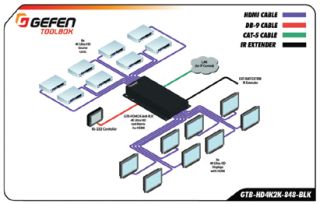 With many video facilities just getting used to working with HD resolution, is it time to jump into the world of 4K video? You bet it is, and Gefen’s GTB-HD4K2K-848-BLK Toolbox 4K Ultra HD 8x8 Matrix for HDMI is a good place to start. This matrix switcher can not only connect eight independent video streams with up to eight different displays, but it won’t take up any precious rack space.

Good for everything from control rooms and theaters to digital advertising and art installations, the black sheet metal Gefen matrix is surprisingly small at 1.8-by 9.3-by 17.9-inches. It’s not meant to be mounted in a rack, but it can be screwed vertically into a wall or horizontally above or below a shelf.

The Gefen matrix is dominated by an octet of HDMI inputs on one side (numbered 1 through 8) and outputs on the other (lettered A through H). Each port is compliant with the HDCP 1.4 standard and the HDMI plugs have thoughtful screws to keep the cables from being accidentally pulled loose at exactly the wrong moment. Gefen’s Mono-LOK cables are available in 1-, 3-, 6-, 10-and 15-foot lengths to make sure the cables stay put. You don’t have to use Mono-Lok cables. You can also use standard HDMI cables, but you will lose the cable’s locking feature because standard HDMI cables do not feature a locking mechanism.

Powered by a 24-volt AC adapter, the device has ports for connecting the system to a network and an RS-232-based system for remotely controlling the gear. In addition to a mini-USB port for updating its firmware, the Gefen matrix has an infrared extension jack for its remote control.

Inside is the equivalent of a high-end graphics computer built around a 300MHz pixel clock. The Gefen switcher has a row of control buttons for turning it on, opening the menu and mating the inputs with the outputs. While the buttons are a direct way to set things up and make changes, the spring-loaded switches are loud and take a little practice before tapping in the right sequence becomes second nature. At any time you can lock the buttons out for when you can’t afford to inadvertently press the wrong one.

Its 0.9-by 3.9-inch monochrome display shows which of the matrix’s inputs are connected to its outputs. It shows two lines of 16 large and readable characters with a bright blue backlighting. On the downside, there’s no way to dim or turn the light off for full black-out conditions. There are also LEDs that display whether the system is turned on and if the buttons are locked.

Without a doubt, the easiest way to control the switcher is to use its oval-shaped remote control. Just press the letter that corresponds to the output with the number for the input. Happily, the order doesn’t matter.

With the ability to handle video streams all the way to 4,096 by 2,160 resolution, the system is all digital and does without any analog inputs or outputs. At its top resolution, however, the device’s refresh rate drops from a maximum of 60-Hertz to 24-Hz. It tops out at 12-bit color, passes through 8-channel sound from the HDMI signal and works with audio enhancements like LPCM 7.1, Dolby TruHD and DTS HD Master Audio. The device, however, lacks an audio output to monitor sound.

The system looks backward as well as forward with the ability to use an RS-232 control system and puts an exhaustive library of commands at your fingertips. Happily, you can also control the switch via a wired network, but the Gefen switcher can’t be supplied with electricity via Power-Over-Ethernet and can’t connect via WiFi.

Once it’s online, tap the Menu button twice to see the system’s IP address. Then, type it into a Web browser and the Gefen matrix’s simple and functional networking interface pops up. There are tabbed pages for setting up the input-to-output routing scheme with color coding to show each line’s status. You can quickly configure presets that make the Gefen matrix perfect for multi-use rooms.

The system also shows its current status of the input and output connections with details like color depth, resolution and whether it’s a 3-D signal. It can also put each output’s Extended Display Identification Data (EDID) info on-screen. Unfortunately, there’s no online way to monitor any of the video streams or even look at the traffic flow into and out of the Gefen matrix, a valuable technique for optimizing any piece of video gear.

After plugging the system in and connecting its input and output cables, the matrix’s Syner-G Discovery and Show-Me simplifies its IP set up. In 12 seconds, it is displaying the material. When it’s called upon to change inputs or outputs, the switcher takes 2.5-seconds to cleanly make the move.

The 8x8 matrix switcher came into its own when I connected it to eight inputs, ranging from PCs, tablets, a live TV feed, a pattern generator and a Blu-Ray drive that ranged from 1,920 by 1,080 to 3,440 by 1,440 resolution. At the other end, the outputs were dominated by three WQHD 34-inch curved displays that were set up alongside several HD monitors and an HD projector. Over the course of several days of use with a wide variety of material—including high-resolution images, 4K clips and live video—each feed was rock solid stable with excellent color and no artifacts or lost frames.

Even with 16 devices online, the device never got more than warm to the touch. It tops out at less than 100-degrees Fahrenheit. Since there’s no fan, the Gefen matrix is control room quiet, regardless of whether it’s idle or connected to eight sources and displays.

While the Gefen matrix’s use of only HDMI ports is a potential limitation, it supports DP or DVI adapters on input and DVI on the output. It, however, lacks a scaling engine that is part of the latest gear from Atlona and Crestron. This means that each output stream mirrors its input so that an HD source is sent to the display as an HD signal, even if the display can handle higher resolution.

At the moment, the Gefen matrix is a one of a kind device that has no equivalent among its competitors. Its $2,699 price tag undercuts the price of Atlona’s 8x8 AT-H2H-88M matrix switcher by $900, which includes analog inputs and outputs but can only go as high as HD resolution. While the Gefen device comes with a 2-year warranty, it pales in comparison to Atlona’s standard 10-years of coverage.

It’s a sure bet that others will catch up quickly with similar gear that can handle the rigors of 4K resolution. For now, however, the GTB-HD4K2K-848-BLK is the only show in town.