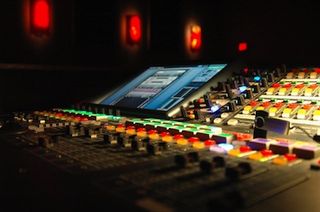 “I’ve always been involved in live music, but never owned a venue before,” Smith said. “I wanted to create a sophisticated adult listening room that sounds great and where artists want to play. That was the basic idea behind The Live Oak. We worked with Chris Jordan of Electro Acoustics here in Fort Worth on all the performance aspects of the design.”

Electro Acoustics is a full service design/build firm that employs a comprehensive approach to audio, video, lighting and acoustics. “This was a great project, because Bill Smith had a clear vision and trusted us to make it happen,” said Chris Jordan, the firm’s president and chief steward. “It’s an intimate space, but had to be good enough to attract national acts, both in terms of the room itself and the rider-friendliness of the sound system. Originally, we didn’t think we could afford a MIDAS console, but then the PRO2 came out. When we saw the demo, we just instantly fell in love with it. It’s the best digital console we’ve ever seen in that price range, by far. And obviously, the MIDAS name makes it extremely artist-friendly. It was a perfect fit for us.”

Jordan was most impressed with the console’s sound quality. “That was the first thing Bill Smith said to me—that the room had to sound awesome,” he said. “We had another well respected console in our original design, but then the PRO2 came out. It has those great-sounding MIDAS preamps, EQs and effects, and I love the time coherency. It has so much horsepower at such a low price, it really changed the value equation. Making that change was actually an easy decision.”

Beyond the actual price, The Live Oak and Electro Acoustics found the PRO2 saved money in other ways. The console’s EQ and effects engines eliminated the need for outboard gear, while the Cat5 fiber connectivity meant no bulky copper snakes, even with the DL251 I/O box located onstage.

Chris Jordan notes, “Not only do we save significant cash in terms of hardware and wiring, but also in terms of space. The PRO2 lets us run both the house and monitor mixes from one surface, but still keep the control booth small enough to give about five extra seats, which was a big consideration for an intimate venue like The Live Oak.”

Another consideration was ease of use. “It’s really a very intuitive board,” said Jordan. “I basically taught it to myself on a Saturday afternoon. Once I figured out the patching, the rest of it really began to flow. I love the ergonomics, especially the POP Groups, and the instant access you have when making adjustments. You’re always just one button away from anywhere you need to go, so the navigation is incredibly fast, which is really important in a setup like this. It’s really the most fun board to mix on that I’ve ever seen.”

With room for about 200 patrons seated or 500 standing, The Live Oak features both local and national artists, with the added attractions of a high-end restaurant and a bar featuring over 200 beers. In addition to the main music hall, the venue also boasts a lounge with live music, plus both street-level and rooftop outdoor patios. Since its June 15 opening, the venue has hosted such artists as John Oates (of Hall and Oates), Iris Dement, The Vespers, and Jim Lauderdale.