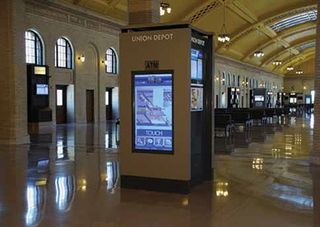 Fans of historical transportation will certainly find the story of the Union Depot in downtown St. Paul, MN fascinating. First opened in 1881, the station burned down in 1913. A new station, the current Union Depot, opened in 1923 and was fully completed in 1926. It had nine railroads and 282 daily train movements at its heyday in the Roaring ’20s. However, people change along with the times. A slow, steady decline based on emerging travel options led to a discontinuation of passenger rail service in 1971.

“We had many concerns with retaining historical character,” said Austin Madsen, network specialist for Tierney. “Because Union Depot is on the historic registry of buildings, there are certain things we could not do. That required some careful workarounds in the design and implementation.”

Many of these challenges centered on historic cabinets that once displayed printed travel schedules and wayfinding information. These cabinets were renovated to house digital display screens, effectively transitioning Union Depot to dynamic signage solutions.

“We had to hang LE D monitors on these cabinets without altering them or drilling holes, while making it appear as though they belong there,” said Richard Long, sales engineer for Tierney. “We took standard inexpensive mounts and secured them to metal plates that McGrath designed specifically for these cabinets. No one would be able to tell that these displays were ever there should the Union Depot take them down.”

Tierney worked with the Union Depot IT team to program the Carousel system and address networking challenges—a key challenge in the case of the latter.

“There was no network when we started the project,” said Madsen. “A network was soon established for internet and signal distribution in other areas of the building, but it was decided the digital signage operation required its own network since Carousel was pulling information from so many outside sources.”

The migration to digital signage also centralizes the multi-modal facility’s bus, rail, taxi, and bike service schedules—including Metro Transit and Jefferson Bus Lines —into a common Union Depot-branded display. This ensures that all display signs maintain a consistent look and feel regardless of which transportation schedule is displayed, while simplifying the Carousel programming. The result is a successful intersection of historic appearances and modern functionality.

Looking forward, Union Depot expects to incorporate more advertising into the signage system. Tina Volpe, marketing manager for the facility’s management company, Jones, Lang, LaSalle, said, “We are definitely looking to generate additional revenue through more advertising,” said Volpe. “It’s another business opportunity that we hope to grow over the next year.”

For Tierney, the project was ultimately satisfying given the success of the integration challenges across an historic property.

“The intent of this space was really to honor the history that had been there,” said Harvey. “To maintain the sentimental value and bring it into the 21st century was a really neat way of bringing its 130- year history all together.”