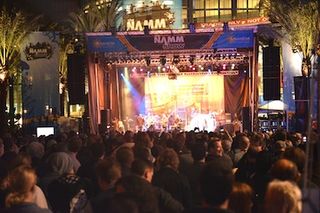 I wrote, immediately following the NAMM show, of a nice show-wrapping set on this big new stage that was put in place for the late January show (see Big Surprises and Small Victories at NAMM 2013). Here is more detail, from the folks at Harman, on that stage—surely the best new addition to the NAMM show, already a great event—in years.

"This is my first time mixing on both Soundcraft’s Vi6 and JBL's new VTX line array system," Droke said. "This system has plenty of punch and low end. This band has a lot of low-mid energy with our 5-piece horn section, particularly the baritone sax, and the system handled it with ease. I particularly noticed the extended high frequency response and the musical detail in the VTX rig."

HARMAN’s AKG vocal and instrument microphones blanketed the stage: 10 C518m clip-on mics for toms, two D12 VR’s on bass drums, two C430’s, four C451’s, six C214’s for overheads, two C414’s, 10 D40’s, 10 D5’s, two C3000’s, four C5’s, two C4000’s, three C4500’s, two custom gold-colored DHT 700 C5’s, one C411, and numerous gooseneck microphones were in use, with two HELICAL long distance range-extending wireless antennas located at the FOH position."Taken together, the AKG mics, Vi consoles, Crown VRacks and the JBL VTX line arrays make a powerful combination," said Stahlhammer, who with his crew manned the stage system for up to 12 hours a day. "With JBL HiQnet Performance Manager software tying it all together, the process of configuring the system and monitoring its performance during the show has been streamlined. The application has been laid out to follow our normal workflow processes, and it saves me time and effort."