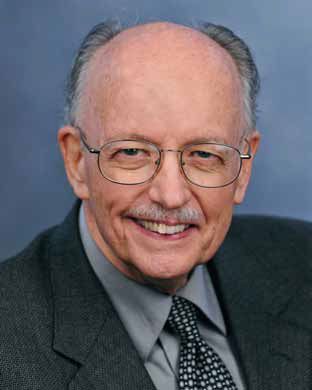 Changing History One Sound at a Time

Bob Coffeen is renowned for his research in acoustical engineering, particularly stadiums and performance venues.The scene is Washington Dulles airport, sometime around 1959. As the only one with any communications experience at his engineering firm, Bob Coffeen was tasked with developing a system of prerecorded announcements in various languages for the airport. It’s a standard technology in every airport today, but “it was fairly revolutionary at the time,” he said.

Back then, recordings were made on magnetic tape. Soon after, Coffeen was designing airport audio systems across the country.

“I became self unemployed,” Coffeen said, chuckling, about the trajectory his career took following the job that effectively changed the course of acoustical engineering as we know it.

Coffeen is a professor at the University of Kansas, School of Architecture, Design and Planning. He served as an engineering officer for the U.S. Army before going to work for Burns and McDonnell Engineering Company in Kansas City. From there, he founded a consulting firm in the early ’60s, which later became Coffeen Fricke and Associates.

While he said he’s honored to join SCN’s Hall of Fame, Coffeen is no stranger to industry accolades. He has been named NSCA University Educator of the Year three times, as well as receiving the Acoustical Society of America’s (ASA) Rossing Prize in Acoustics Education in 2011.

“Bob is an educator through and through, and I had the great fortune of learning most of what I know about audio systems from him,” said Chuck Wilson, NSCA. “In the very early stages of my career, we had three large installations where Bob designed and commissioned the systems. I was in awe of his expertise and probably drove him crazy with all my questions. Over that two-year period, I received an education far beyond anything I could ever ask for. I’ll always be grateful to him.”

Coffeen took his early cues from some prolific figures. One of his mentors was C. Paul Boner, credited with inventing sound system equalization in the late ’50s. He also worked early on with Eero Saarnin, a Finnishborn architect famous for designing the iconic Gateway Arch in St. Louis, as well as Dulles airport, among many others.

Coffeen was the first to meaningfully study the effect of fabric roofs, specifically air-supported roofs, on the acoustical systems in stadiums. He helped design the BC Place Stadium in Vancouver.John Fricke, president of Coffeen Fricke and Associates, considers Coffeen “an excellent instructor…He likes trying things out first hands-on.”

Fricke also identified Coffeen as someone always deeply committed to working with property owners for the best possible result. He recounted one incident where there wasn’t enough seating area coverage as they were commissioning the space. Coffeen bought another horn, shipped it down to the jobsite in Florida, and had everything working before they finished commissioning. “It was his way of making sure it was alright for the owner,” Fricke said. “He made every job work.”

Coffeen is also renowned for his research in acoustical engineering, particularly stadiums and performance venues. He was the first to meaningfully study the effect of fabric roofs, specifically air-supported roofs, on the acoustical systems in stadiums. He helped design the BC Place stadium in Vancouver, as well as the Silverdome, outside Detroit, among others. He worked on the first semidistributed audio delay systems at Indiana State University. He considers digital audio delay “one of the most important things to happen to audio systems in my lifetime.”

Another important research topic he studied was using small amounts of audio delay to reduce the effect of comb filtering between multiple loudspeakers in a room. “I discovered that in Vancouver and thought I’d found some miracle,” he said.

Today, he works with his students to study auralization, listening to computer models of space to determine their real-world accuracy; rain rooms; and measurements on the use of vertical rising drapery for reverberation control in auditoriums.

Coffeen’s favorite part about teaching is the opportunity to give students “some of the things that were taught to me and that I learned over the years.”

Lindsey Adler is the associate editor of SCN.