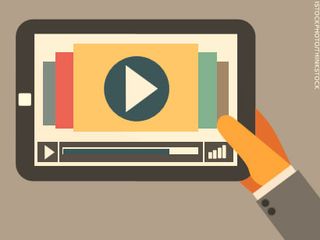 Remember when you called the shots on what devices your colleagues were allowed to use? Remember when it was you who determined what they could and couldn’t connect to the network? Remember when BYOD meant nothing—except that maybe there was a typo on that invitation to the neighborhood barbecue? Feeling nostalgic?

Well, we haven’t found anyone who will declare that bringing one’s own device to work or school is merely a passing phase. Nor is anyone arguing too loudly that video communications are going out like the typewriter. Put the two together, and not only are you dealing with managing enterprise video, but now you have to consider what needs to be done to make it mobile. And, if we’re to believe Cisco, this issue will become an increasingly important one in the next few years: the company predicts that as of 2018, video will account for over two thirds of the world’s mobile data traffic.

“This is creating some challenges for people who have been using traditional, proprietary streaming solutions for many years,” said Chris Knowlton, vice president of product management at Wowza Media Systems LLC, a video management software developer based in Evergreen, CO. Especially since different devices require different protocols.

Knowlton noted that Wowza’s solution enables tech managers to deliver video content to all of these different end-points with a single stream. “You can have multiple cameras feeding into a single encoder, or even use some of the newer cameras that have encoding built in,” he explained. This addresses the different types of devices out there, and it also adapts bit rates automatically. “Each user has different conditions where they are. They could be on older devices, or devices that are on WiFi in a bad zone. With adaptive bit-rate streaming, the stream will adjust automatically to give them the best possible performance without buffering, wherever they are.”

This touches video players, noted Ari Bixhorn, vice president of marketing at Panopto Inc., a video capture and management software company headquartered in Pittsburgh, PA. “One of the things that we talk to IT managers about is ensuring that their video management platform uses video players that can automatically detect what type of device is accessing the video, and serve up the best format for that device,” he said, adding that this takes into consideration network connection speeds. “Adaptive bit-rate streaming is increasingly important for mobile devices because they could be displaying video from a high-speed wireless network, or [the user] could be accessing it from a 3G or 4G connection, and if a video management platform can’t identify that and serve up the right format and bit-rate of video, then I’m not going to get a great playback experience on my mobile device.”

But what do you do with your existing video library that contains clips the organization still wants to leverage? “There’s often an additional step that’s needed to import all those existing videos into a video management system that will convert them so that they can play back on any device,” Bixhorn explained. He cited an example, whereby a client had been storing video content in SharePoint; the content was formatted as flash video, which isn’t supported on iOS devices. “We talked with them about a solution that would let them import those flash videos into Panopto’s video management system and then automatically convert them to formats that would work not only with iOS devices, but that also play back on desktops, Android devices, Windows phones—whatever device they may be using.” He adds that these are typically the types of compatibility issues that tech managers face.

While sites like YouTube, Vimeo, and Dailymotion are specifically designed for discovery––if you want to go viral, that’s where you post—the bulk of enterprise video is intended for controlled distribution: certain people must watch it, and others won’t be allowed to. Which begs another question: What about security?

The good news, Brown believes, is that video can be secured like any other data form through enterprise management tools like the one his company offers. “Access to video is mediated by database security and Web security, active directory, federated security—all the same things that secure email and Web sites and everything else. It is no harder to secure than all other data types.” And, if the public or outside parties don’t have access to your private enterprise data in the first place, your risk exposure decreases.

Security is also a “people issue,” Bixhorn pointed out. “Part of it is ensuring there’s a cultural understanding of where videos that are recorded on mobile devices can and should be posted,” he said. Once again, Vimeo and YouTube aren’t always the best outlets, even if they may be the most user-friendly. “It’s important for businesses to put policies in place and educate their employees that if they are capturing mobile video, there are places internally that are secure and appropriate.”

While there is a lot of talk about High Efficiency Video Coding (HEVC), or H.265, Knowlton believes that this won’t make a big impact on the enterprise just yet. “Traditionally the enterprise––especially the larger corporations––are several years behind where the current technology is, with turnover cycles where they keep equipment for three to six years, and then they roll it over to the next thing.” He also stated that enterprise video doesn’t generally require large screens. “[Most corporations] aren’t worrying about the higher definition outputs and televisions that we hear about at CES.”

Technical details aside, for Brown, mobile video—and the appropriate management thereof— offers organizations an ROI that not only cuts down on travel costs by connecting people without having to have them all congregate in the same location, but it also boasts a considerable lifespan. “Today, video allows you to easily and economically convert those presentations, those lectures, into permanent, thin, portable, Web-based documents that can be used over and over, forever,” he said. “They also become permanent knowledge bases and sources of training.”

One of the challenges with video is metadata, which is often treated as an afterthought—requiring someone to create tags manually after content has been uploaded into a library. Ari Bixhorn, vice president of marketing at Panopto, encourages organizations to capture metadata from the outset, while the video is being recorded.

“That metadata can be automatically extracted from the video in a number of ways: If I’m recording a Power- Point presentation, the words on the PowerPoint slides are some of the most important metadata that could be used to search and find that video in the future,” Bixhorn illustrated. “There are platforms that will automatically ingest the text from PowerPoint slides so that that manual metadata process doesn’t have to happen.”

Along the same lines, metadata can be extracted from the audio itself. “If I know that at three minutes into a video I say the words, ‘video encoding,’ someone on a tablet or smartphone could search for ‘video encoding’ and not only find the video where that term is mentioned, but fast-forward to the exact point in the video where that term was mentioned.”