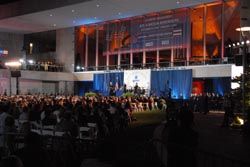 Advanced Staging Productions supplied gear for the 2006 presentation of the Liberty Medal at Philadelphia's National Constitutional Center. Advanced was responsible for providing concert quality audio outside of the center for performances by Bon Jovi.
Because the Liberty Medal was presented to former presidents George H.W. Bush and William J. Clinton, security was a critical part of the event. Advanced relied on its experience with Presidential and White House-related events to smoothly navigate the labyrinth of clearances, permits, and approvals.
The presentation of the award was held outdoors on the lawn of the NCC while the following gala was held inside on the Grand Overlook, essentially creating two separate but equal events. As the NCC is a working museum, it needed to remain open during set-up. This created some space and flow issues and required an overnight set made more difficult by the unpredictable weather and inevitable rain showers that made everything just a little more interesting. But the Advanced team remained unbowed, and with contingencies in place throughout, the setup was completed and tested well ahead of the rehearsal schedule.

There were numerous technical and coordination challenges to contend with, including scheduling demands, logistics and communications and, of course, egos. Advanced and the NCC team worked together with Local 8 IATSE technicians, WPVI and CBS broadcast personnel, caterers, decorators, entertainers, and local and national security to ensure a smooth running event. Our success at meeting our time line and coordinating a smooth-running event was directly related to the competence and hard work of a dynamic team that included Jennifer Darley, NCC Director of Facility Rentals, Karen Homer, a local producer, and Jeff Spence and Justin Covington, project leads from Advanced Staging.

One of the most challenging timing issues related to the live broadcast demands. Advanced developed a tight timeframe to meet the demands of a live broadcast on 6ABC (WPVI), allowing for national break-ins by ABC World News with Charles Gibson. All plans for audio, video, and lighting were engineered to make sure everyone on stage was clearly heard and seen, from local and national political celebrities to nationally renowned entertainers, including Julie Roberts and Bon Jovi. Also performing were a local choir and church group.

Services provided by Advanced Staging Productions included the design, installation, and operation of all indoor and outdoor lighting. Special attention was given to balancing live aesthetics with a high quality video image for the live broadcasts. Advanced lighting designer Jason Showers expertly handled both aspects, and with some architectural lighting, created a dynamic live experience that also looked great on TV.

Advanced audio engineer Brooke Ashman had to provide high level, distributed sound outdoors for the speeches and concert quality audio for the live performances by Roberts and Bon Jovi. He also had had to ensure that there were broadcast quality feeds for television. Using 12 Funktion One Resolution Two Series speakers, six as mains and six as delays. Also he used eight EV QRX-115s for front fill and monitors, a Crest XVCA for FOH, a Crest HP 8 for monitors, and a custom processing rack that includes components from XTA, BSS, Lexicon, and Ashley, he hit his mark perfectly.

Indoors, the cavernous Grand Overlook presented its usual challenge, caused by the Center's high ceilings, marble and glass construction, and angled walls and ceilings. Ashman, noted for his ability to overcome these obstacles, had previously designed a system for the space that helped Advanced land the preferred provider designation. For this event, he again was at the top of his game.

Outdoors, the video display and broadcast, including playback, live I-Mag and multiple feeds was handled by a team lead by Bill Noecker of Advanced. Video included WPVI personnel on cameras and two Toshiba 15 millimeter TECHNORAINBOW 9.6x12.6 foot LED walls provided by Mitch Kaplan's Video Walltronics. Although this is a task usually handled in full by Advanced on-site, in this case, Advanced stepped out of the norm and teamed with numerous vendors, which proved to work out extremely well.

The technical expertise of Advanced Staging Productions and its allies was a given going into this production. Without that confidence, the NCC could have been easily overwhelmed by the tasks facing them. With the expert guidance of the Advanced project team and the level headed management of the logistics and opportunities on site, the presentation of the 2006 Liberty Medal was an event to be remembered for high profile flair, exact execution, and reinforcement of the NCC and Advanced Staging Productions as a premier event team in the Northeast Region.