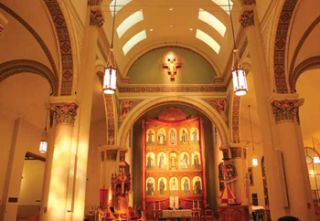 SANTA FE, NM—When Rev. Jerome Martinez y Alire, Monsignior at St. Francis Cathedral Basilica in Santa Fe, NM, visited the Basilica of St. Mary in Minneapolis, MN in 2009, he left with one pressing question: “Who did your system?” A few weeks later, Stefan Svard, president of Minnesota integration firm Audio Video Electronics (AVE), was on a flight to New Mexico.

Having worked in churches his whole life, starting out running sound at his church youth group at the age of 13, Svard is as good an expert as one can find in designing sound systems for churches. His more recent installs, both the Basilica in Minneapolis and the nearby Seminary Chapel in St. Paul, proved what he was capable of, and gave the congregation in Santa Fe a tantalizing glimpse at what is possible when sound is done right.

“We talked about their dreams for the system,” Svard said, “and I heard their existing disaster of a system, and I put together a written proposal—not a really detailed one, but kind of the 30,000-foot-view proposal of what they needed to do.”

When the costs were tallied, Svard’s proposal came in at three times the cost of a local integrator from Albuquerque the church brought in to do a counterproposal. “We had a discussion about why they should spend three times as much on a system,” Svard explained, “and we went through all the details and differences.” In the end, the congregation was so inspired by AVE’s work in Minnesota and Svard’s dedication to quality that they went with the pricier option. After two-and-a-half years of fundraising, Svard finally got the call. “They said ‘We have the money! Let’s do it!’”

For the heart of the system, Svard installed the Lectrosonics Aspen 1624 Digital Matrix Audio Processor, which he cites as having one of the best automatic mixing protocols he’s ever heard. “The priest can have his headset or lapel mic on and walk right up to the podium mic,” he explained, “and it doesn’t have the phase cancelation or cone filtering that you normally get two mics colliding at the same time.” The end result is a testament to the power of a DS P-based mixing system. Plus, since Lectrosonics is based in New Mexico and manufactured one-anda- half hours from the church, there was the added bonus of keeping some money in the local economy.

The entire system is controlled via an Apple iPad. AVE worked with Lectrosonics’ Frank Gonzales to re-write the Lectrosonics app, pushing the envelope and customizing its functions to suit the church’s needs. Svard had first used an iPad in his Minneapolis install, and he may never go back. “Every time we go into a church and show them that you can control a sound system form an iPad, they’re in love,” he said. “They go ‘That’s what I want’ because it’s something even a three-year-old can use.” Because of the iPad, the mixer and rack can be placed in the sacristy in the rear of the church, completely out of sight.

Providing the bulk of the audio are two Tannoy QFlex 40 steerable line arrays. As far as Svard is concerned, Tannoy has come to the front in sound quality and musicality. These tall, narrow columns are mounted and custom painted, which is a step Svard always takes when doing church installs. “Any time we put in a system we do custom painting to have the speakers disappear into the architecture of the church.��

Flat wire was used throughout the install as a further step to preserve aesthetics. “We do everything to hide and make things disappear.”

Rounding out the audio are Community Entasys column line array speakers used for fills and a Tannoy VS10 BP compact subwoofer to handle the low end of male voices and to preserve overall fundamentals. QSC CX Series amps power the system. Lectrosonics, Audio-Technica, Audix, Earthworks, and DPA mics are used, and a Listen Technologies assistive listening system was installed.

One interesting feature of this install was the need for an Uninterruptable Power Supply (UPS) due to New Mexico’s tendency for regular power outages. Svard went with the APC S15 to guarantee steady electricity. “We’ve got a lot of sensitive equipment,” he noted. “If the power goes out and I can’t connect to it, how can I do anything about it? Even while we were there doing the install the power went out. Those types of things never happen while you’re there!

Adding an extra layer of security, Svard gave himself remote connectivity for the whole system. “If I get a call that says the system isn’t working right, I can hop on my computer, log into their sound system and see everything.”

While the inspiration for this install may have originated at the Basilica in Minneapolis, Svard is confident that what St. Francis wound up with sounds far better. “It’s the best sounding system I’ve ever done in a catholic church,” he proclaimed. “It’s absolutely phenomenal.”